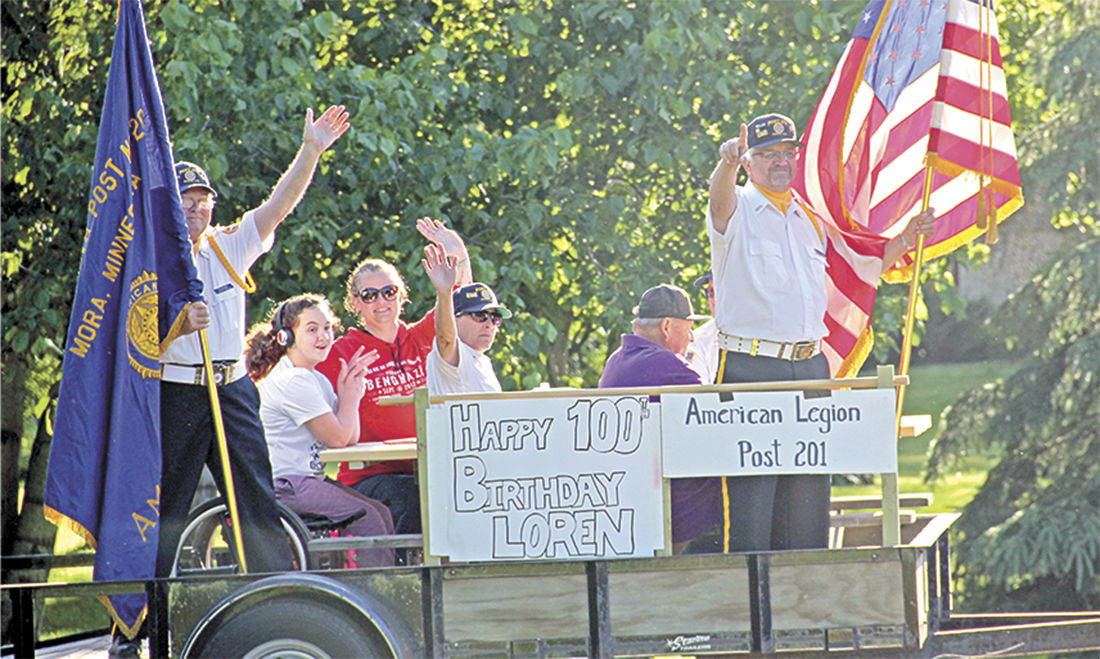 A parade of flags, trucks, tractors, family and friends processed. 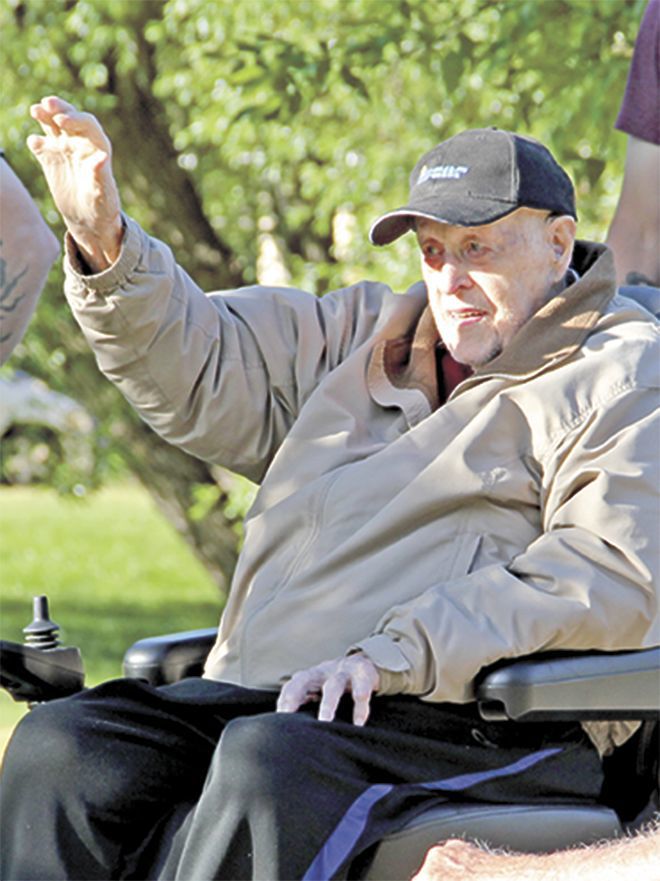 Loren Holland waves from the yard. 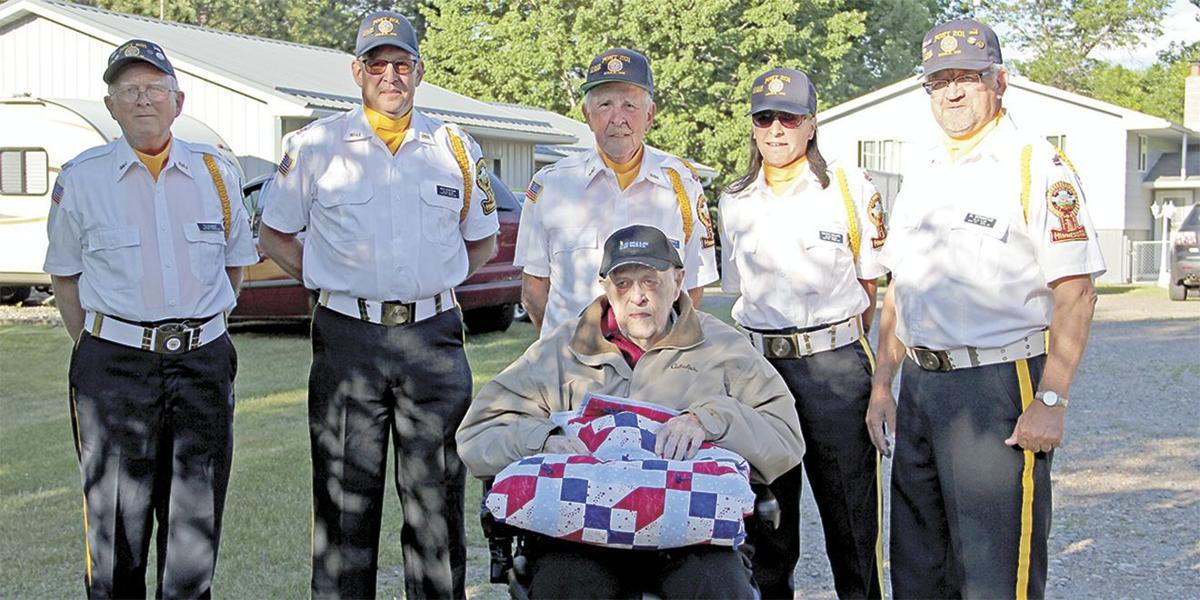 A parade of flags, trucks, tractors, family and friends processed.

Loren Holland waves from the yard.

“I think I did most everything I ever wanted,” said Loren Holland. “I didn’t get filthy rich, but I think probably it’s better I didn’t.”

Loren, who celebrated his 100th birthday June 12, was born on a farm about 5 miles north east of Mora. His parents were both born and raised here too. His dad passed away at 29 years old of spinal meningitis. Some of Loren’s earliest memories are of this time. His father died in the spring of 1929, then the stock market went in the fall. “It was fortunate that it happened that way,” Loren said. “My mother had a sale and got rid of everything on the farm, and we moved into Mora to live.” Loren remembers, “Mother did a marvelous job of putting all three kids through school alone.”

“When I was in high school, I played every sport they had,” Loren said. When he graduated from Mora in 1938, he was given a special award for being the best athlete in school.

After graduation, his grandmother’s brother offered to have him come live with him in Iowa and put him through dental school, but he stayed home. “My family needed me,” Loren explained. He worked in a cream station with his uncle and went into farming after that. The family had a small farm North West of town where he lived until the war broke out. Then he went into the Army Air Force on the administrative end and became a master sergeant. Loren was engaged to Doris Edberg before he enlisted, but they decided to wait to get married until after the war was over.

Loren spent at least a full year in the South Pacific. While there, he was in close proximity to the explosion of a dropped bomb, which led to a temporary loss of hearing and permanent tinnitus. The explosion is also the likely cause for the collapsed lung he suffered after returning to Hawaii.

Loren was running a General’s office when Washington officials decided it was time to give some people furloughs. At that time, Loren had enough days of service and time overseas to qualify for a furlough, and was able to go home. Doris was granted a 10-day leave from the Women’s Marine Corps, during which time they decided to get married. Minnesota had a 10-day waiting period, so they were married on July 9, 1945.

“That was a wonderful, wonderful… what a lady,” Loren said. The war in Europe ended during Loren’s furlough, and he was eventually discharged.

Right after they got out of the service, Loren and Doris lived in Minneapolis for a while. Loren found work at Honeywell doing office work through a very good friend, a lieutenant who was in his office in Hawaii. Their son, Michael Holland, was born during this time. Loren didn’t like living in the cities, so he gave that job up, and they moved up to Grasston with Doris’s parents. Eventually an uncle of Loren’s moved out west and sold Loren his home. This was Loren and Doris’s first home in Mora.

Loren owned a service station in town for a while, then took up carpentry with a move to Bloomington. In his spare time, he built a home on Knife Lake where they then moved. After moving to Knife Lake, Loren did carpentry work around Mora and served as the city’s building inspector. He retired at 65, then started a business sharpening blades. He retired from that work at 85 when his wife was developing Alzheimer’s disease. He wanted to spend all of his time with her. She died in 2009, and has been gone now for 11 years.

“She was a wonderful lady,” Loren recalled. He considers their marriage the thing he is most proud of in life.

On his 100th birthday, American Legion Post 201 as well as friends and family organized a parade that drove by his home to wave. After the parade, Post 201 presented Loren with a Quilt of Valor.

The day after his birthday celebration, Loren said, “I don’t remember wanting anything extra.” “I will never forget yesterday,” he continued. “I woke up last night and thought it was a dream.”

A Century of Wisdom

We asked Loren Holland about the experiences and wisdom he gathered over 100 years of life:

What would be your advice to your younger self?: To be a very honest person, and be a good Christian.

How did your time in the service impact your thoughts on war?: I never thought much about it. No reason to. I would say, it’s a necessary evil.