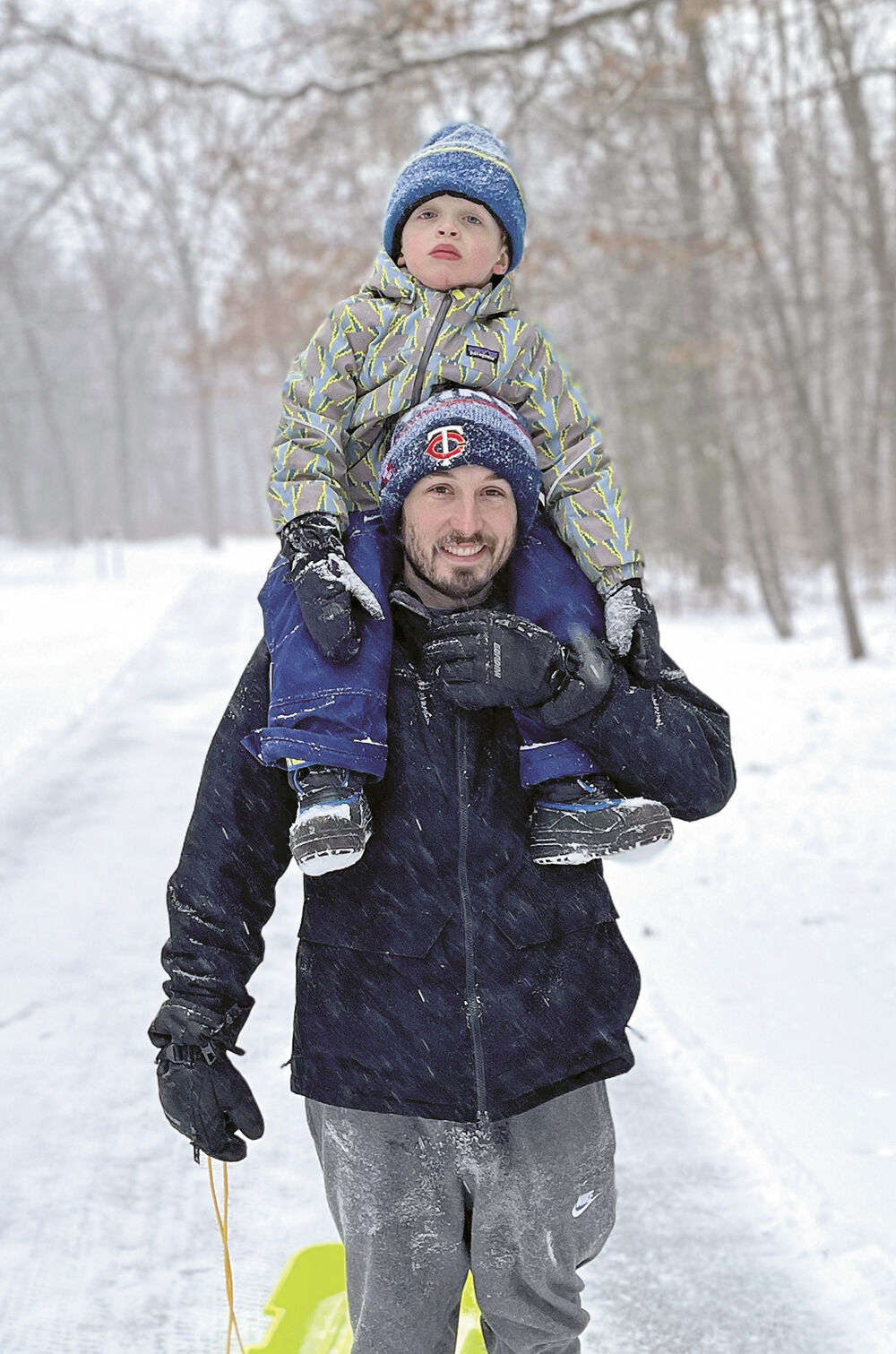 Bryce Rushmeyer carries his son, Quinn (3), during one of the family’s regular walks along the Mora bike path. While not typical for the city, Mora began removing snow from portions of the trail this winter to provide a safe recreational activity for residents during the pandemic. 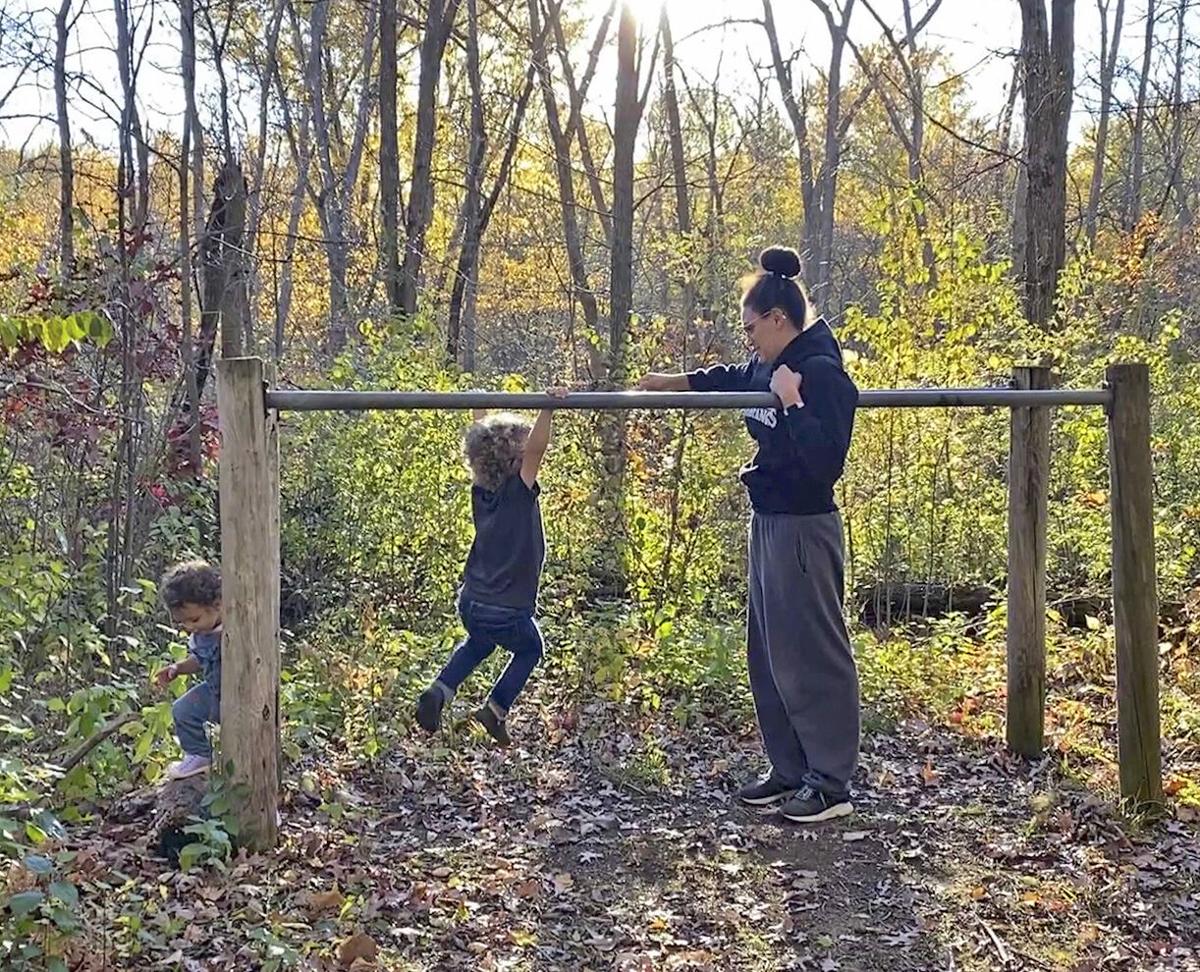 In the fall, Samantha Rushmeyer and her two young children walk the wooded trails near the Kanabec History Center, stopping to play at an installation of parallel bars.

Mora residents continue to utilize area trails and paths to enjoy the outdoors —this winter the city has made it a little easier.

The city of Mora has begun plowing the westernmost sections of the city’s paved bike trail; most years it is not.

Mora City Administrator Lindy Crawford said, “The City Council discussed the possibility and decided that for this year, due to the uncertainty of COVID-19 and the closures the pandemic has brought to our community, city staff will clear sections of the trails to promote good health and wellness.”

Sections of the trails that will be cleared are from Fair Avenue heading north past the Kanabec County History Center and east to South Grove Street, continuing from 7th Street to the north and around to the Wellness Center parking lot.

Crawford said the decision also supported the city motto: “A city for all seasons.”

“To me, ‘A city for all seasons’ means that we have year-round outdoor opportunities for everyone to utilize. Whether it’s canoeing, biking or walking on trails, ice fishing, playing on the playgrounds, snowshoeing, or cross-country skiing, we’ve got something for everyone to enjoy outside in Mora,” she said.

Samantha Rushmeyer, her husband Bryce, son Quinn (3) and daughter Teddy (1) live a short distance from the Kanabec History Center and are frequent users of both the center’s wooded trail system and the city’s paved bike trail.

“I love the decision to clear the trail,” she said. “Since I live so close to the trail, I see how often it is utilized all year round.”

In the summer, the Rushmeyer family uses the trail system five times or more per week. In the winter, they still get out as often as two to three times per week.

Sam described the history center trails as a bit more “off road” but “wonderful.” The wooded trails are not paved. Along the path are exercise stations like parallel bars, platforms for jumping and ramp-like benches for ab exercises. Rushmeyer said her family frequently uses the installations.

As much as she enjoys the trails, she said they could be improved. Some of the exercise stations are in rough shape, and the history center trails could use consistent mowing and trimming.

“It’s a big benefit to the area and it would be nice to see it kept in better shape,” she said.

Sam may soon get her wish. There have been long-term plans to form a complete loop of the city’s bike trail.

The city of Mora has been actively working with the Minnesota Department of Transportation to include a pedestrian crossing that loops under the Snake River bridge, providing a safe route to walk across Highway 65.

Crawford said this year will serve as a trial run for the city to see if removing snow from the bike trail is sustainable in the future.

“It will depend on staff and equipment availability because in the winter months our first priority is clearing streets for pedestrian and vehicular safety” she said.

More information about city parks and trails is available at www.ci.mora.mn.us.

Information about the Kanabec History Center and its trails can be found at www.kanabechistory.org