New, local market demand for sunflower oil spurs Don Olson to grow sunflowers at his farm in Mora. Sunflowers grow well on what would be poor soil for corn. However, the crop is susceptible in wet or windy weather. 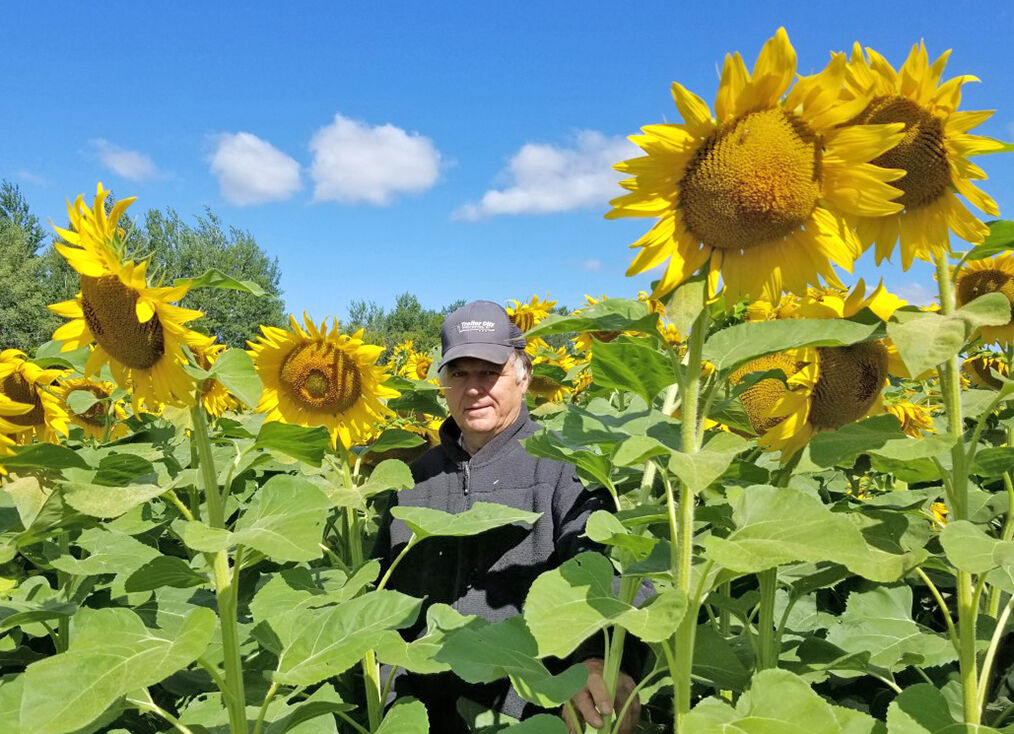 Don Olson began growing sunflowers when a local market opened up for their oil.

New, local market demand for sunflower oil spurs Don Olson to grow sunflowers at his farm in Mora. Sunflowers grow well on what would be poor soil for corn. However, the crop is susceptible in wet or windy weather.

Don Olson began growing sunflowers when a local market opened up for their oil.

Growing sunflowers is a new crop for this area. Don Olson and Luke Olen have grown them for the past two years east of Mora. Olen has completed harvest for this year, but Olson still has half of his 65 acres to harvest. That is because some of them were blown down by a strong windstorm in July. Some of the flowers were down so flat that he may not be able to harvest them.

Olson had an impressive looking crop of sunflowers with 10-inch diameter heads that had the potential to yield 3,000 lbs./acre of sunflower seeds (2,800 lbs./acre is a good yield). Then his fields were hit with a nasty windstorm that knocked down 12 acres flat.

“The heavy heads were facing east, so the west wind absolutely flattened them,” said Olson. “The wind was so strong that the flowers tipped over and some roots came out of the ground. However, the two-inch rain that we got at the time was way more important for our corn and soybean crops than the sunflowers lost in the storm.”

Olson did not have insurance on the crop.

“Sunflowers have a deep taproot,” said Tom Smude, owner of Smude’s Sunflower Oil in Pierz. “They can handle a 30-40 mph wind, but cannot tolerate a 60-70 mph wind,”

Luke Olen who grew 40 acres of sunflowers this year did not escape the windstorm. Half of his flowers also went down. Yields were less than half of what he was hoping for.

Olen also had a different challenge with his sunflowers. Three-hundred crows found his fields and did a lot of damage. “I have never seen so many crows at once,” said Olen. Migrating birds also can create a lot of field loss when they stop to feed on the ripe energy-rich seed.

Despite the challenges, Olson and Olen are growing sunflowers because there is a local market. They haul their sunflowers to Smude’s Sunflower Oil in Pierz where it is processed into a high-quality oil. Smude’s sells their sunflower oil for cooking and human use. They also put it into the bags with their microwave popcorn products. Smude’s Microwave Popcorn is being bagged on microwave popcorn bagging machines that are manufactured here near Mora by Northland Automation Engineering on the Olson farm.

They also like to grow sunflowers because they can grow them on their driest soils and in their poorest fields. Sunflowers like dry sandy soils with a minimum pH of 5.8 and ideally between 6 and 7. “Sunflowers do not like wet feet,” said Smude.

Wet humid weather can also encourage fungus diseases. Olson said that last year when it was wet and humid, they had some head rot fungus disease. This year it was not a problem.

The sunflower’s deep taproot provides another benefit. The taproot pulls up leached nutrients from deep in the soil. Sunflowers also work well in a rotation following corn. Corn can then be planted again after sunflowers rather than soybeans to reduce the potential of fungus diseases if soybeans are planted.

The seed that they grow is oilseed sunflower which is a smaller seed than confection sunflower seed. Confection seed is the striped seed and is used for snack food.

Seed companies are looking at new varieties and working on their oil content. According to the National Sunflower Association, Sunflower oil is light in taste and appearance and supplies more vitamin E than any other vegetable oil. It has a combination of monounsaturated and polyunsaturated fats with low saturated fat levels. The versatility of this healthy oil is recognized by cooks internationally and valued for its light taste, frying performance and its health benefits.

Smude said that he uses some 12 million lbs. of sunflowers/year for processing into oil. That means about 6,000 acres are needed to produce that amount of sunflower seed. He added that he is looking for more growers and has two information meetings each year with farmers who grow or want to grow sunflowers.