Maree Nordenstrom rehearses before services at the United Methodist Church in Mora on Jan. 19, 2020 —the last worship service before her retirement as their organist. 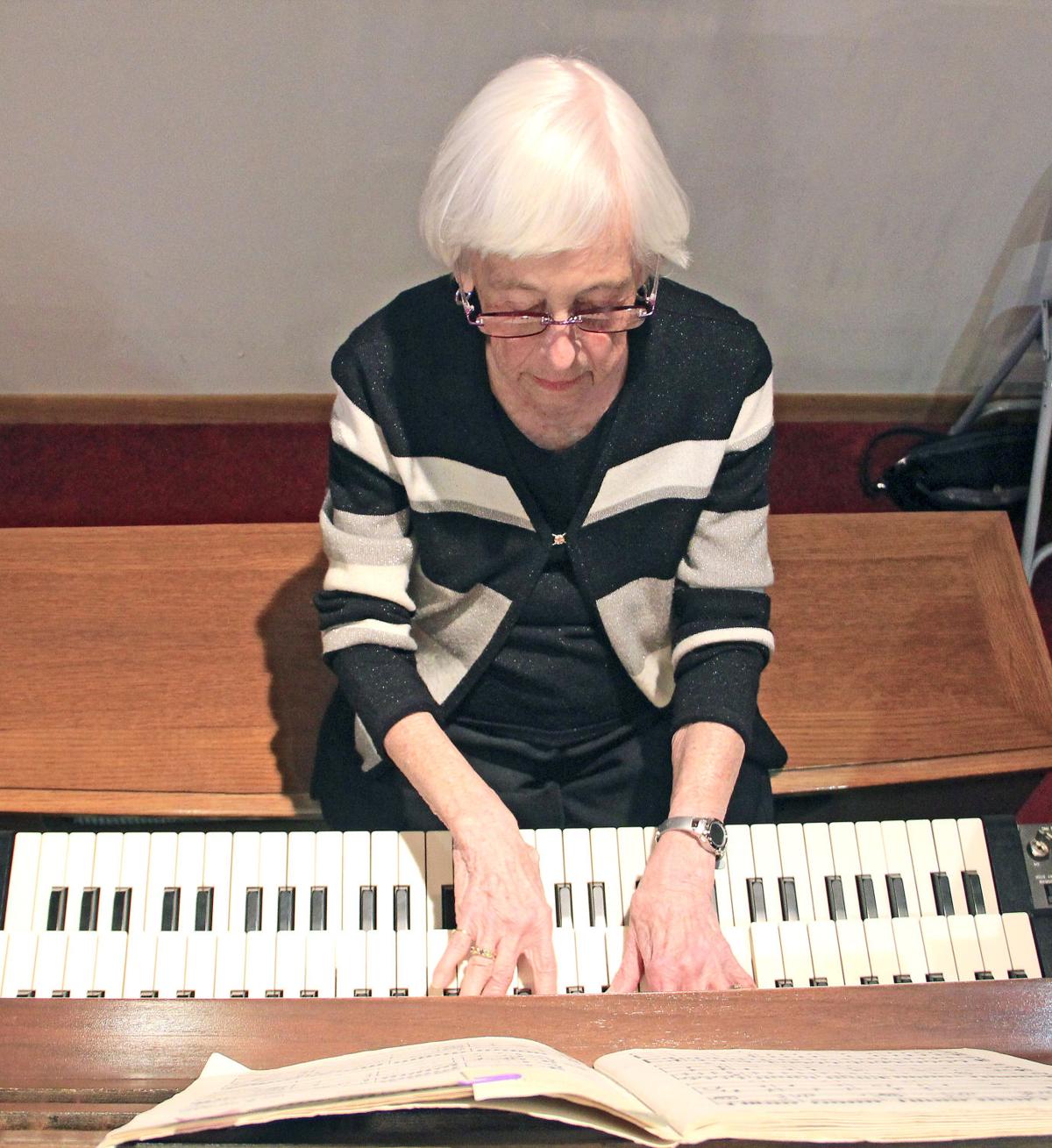 Maree Nordenstrom has been playing the organ for over 70 years, the piano for longer. Her family estimates she has taught piano lessons to some 600 children in her lifetime.

Maree Nordenstrom rehearses before services at the United Methodist Church in Mora on Jan. 19, 2020 —the last worship service before her retirement as their organist.

Maree Nordenstrom has been playing the organ for over 70 years, the piano for longer. Her family estimates she has taught piano lessons to some 600 children in her lifetime.

The girl who began playing the organ just as soon as her legs were long enough to reach the pedals has now retired at age 95 after over 70 years of accompaniment and teaching countless youth to praise God through music.

Soon after they married, Bernard and Maree Nordenstrom built a home in Mora, across the street from Bernard’s parents. It was at the end of WWII. Bernard had just returned from serving in the Army, worked in his family’s construction business, and later would start his own construction business. Once their home was built, the first piece of furniture they purchased was a Kimball piano. Though Bernard died in 2009, the piano remained.

Raised in Chanute, Kansas, Maree can scarcely remember a time when music wasn’t a part of her life. Her mother’s older sister took piano lessons. When her mother’s sister practiced in between lessons, Maree’s mom listened and then tried to copy what her sister had played. Her mother would also sit on the porch during the summer and listen as the calliope played in the distance. She would then go inside and tried to play what she heard. She didn’t know how to read music, but her mom could still play music by ear. “My mother was my musical influence,” Maree said.

Maree first took piano lessons when she was 5-years old. Though she doesn’t remember the teacher’s name, she can recall that the teacher taught her to play by ear. Through that experience, Maree came to realize she and her mom had a similar knack for how they played the piano. “I inherited my mother’s ear.”

While she listened and played piano at home, it was at a Christian Church (Disciples of Christ) congregation in her hometown where her eagerness to learn how to someday play the pipe organ grew.

Later, her church would give her a scholarship to attend Philips University in Enid, Oklahoma to study music, with special emphasis in the piano and organ. “I began to play the organ once my legs were long enough so I could reach the pedals.”

When she arrived in Mora, Maree gave piano lessons in the high school. She also started to attend the Methodist Church. There was a pipe organ there, given by the pastor’s son. After that, Maree was widely sought-after to play both piano and organ, not only in her Methodist Church, but in others as well. At the church, she played for every Sunday worship service as well as weddings and funerals, never calling in sick. In the community, she would be invited to play for weddings and funerals, but for other functions wider than the church as well. “Maree is an excellent accompanist,” her son Dave said. “She has a phenomenal ability to transpose and play music.” Dave sees this as a rare gift, the ability to both hear and read music.

“I just learned to do it by accident, I guess,” Maree marked. “That’s my God-given gift. You can explain it, but it’s difficult to teach it if you can’t hear the music,” she said.

Her arrival in Mora was a bit of a change for her, both personally and musically. Chanute had a population between 15,00-20,000 people. The music scene was more competitive where she came from. In Mora, she was involved playing music almost immediately.

“She should’ve become a professional musician,” her brother Marvin said. And he would know. Marvin, known as “Doc” Holladay, is a professional saxophone player who tours with the Dizzy Gillespie Orchestra and with Aretha Franklin, among others. It is recalled in the family that Marvin once remarked that “Maree was a better musician than he was.”

When I asked her what her favorite hymn was to play, Maree didn’t hesitate. “Faith of Our Fathers,” she said. “I’m not sure why. I didn’t grow up with it.” When I asked her to play the hymn, she walked slowly from her chair to the Kimball piano and sat down. Without looking at any music, she began to play. The notes she played were strong, confident and joyous. This was the work of a musician who knows her music, and her place in relation to the music.

“I learned to praise God through music from her,” Maree’s granddaughter Karen said. From the time she was 4 until she was 12, Karen took piano lessons from Maree. When Karen turned 12, Maree made her learn how to play the organ. Karen played her first worship service when she was 13.

“Everybody remembers Maree as their piano teacher,” Karen said. “Every kid who took lessons from her gained greater appreciation of music. Maree is a profound musician,” she explained. From over 70 years of teaching lessons on the piano and organ, Maree’s son Dave estimates that Maree has taught around 600 people to play.

Maree would teach all five of her children to play music, though only BJ, her youngest, still plays music.

“Maree is stubborn,” Karen said with a laugh. Dave would recount practicing piano and Maree shouting from the other room “That’s supposed to be a sharp.” Scenes like this are the thing of legend in their family’s lore.

Karen would go on to study piano and organ at Concordia College and to major in theology, and sacred music and organ music in graduate school. Karen counts Maree not only as a profound influence in her life as her grandmother, but also as a teacher and mentor.

“I learned discipline from Maree. She was the hardest teacher I had in my life.” Karen recalled not getting away with anything. And though she hated it as a kid, she grew to appreciate it, giving shape to Karen’s future in music and life.

Maree taught her confidence, how to sight-read perfectly. Because of the discipline she learned from Maree, Karen credits her grandmother for “lead[ing] me to be successful – in work, in life, raising step-kids and how to read people in a holistic sense.”

Mostly, Karen said, Maree’s “…affection and love is transmitted through her music.”

On January 19, 2020 Maree played her last worship service at Mora United Methodist Church. At 95-years old, after over 70-years of playing and teaching for the community, Maree counts the opportunities a “…privilege to start people on their first lessons.”

Though she’s now retired, Maree was quick to add, “I expect to be available, if necessary. I don’t really expect it will be my last Sunday,” she said.

Maree was my piano and organ teacher growing up. I am now a professional concert pianist and organist and owe so very, very much to Maree—not only her comprehensive musical guidance but also her encouragement, her example and her love.