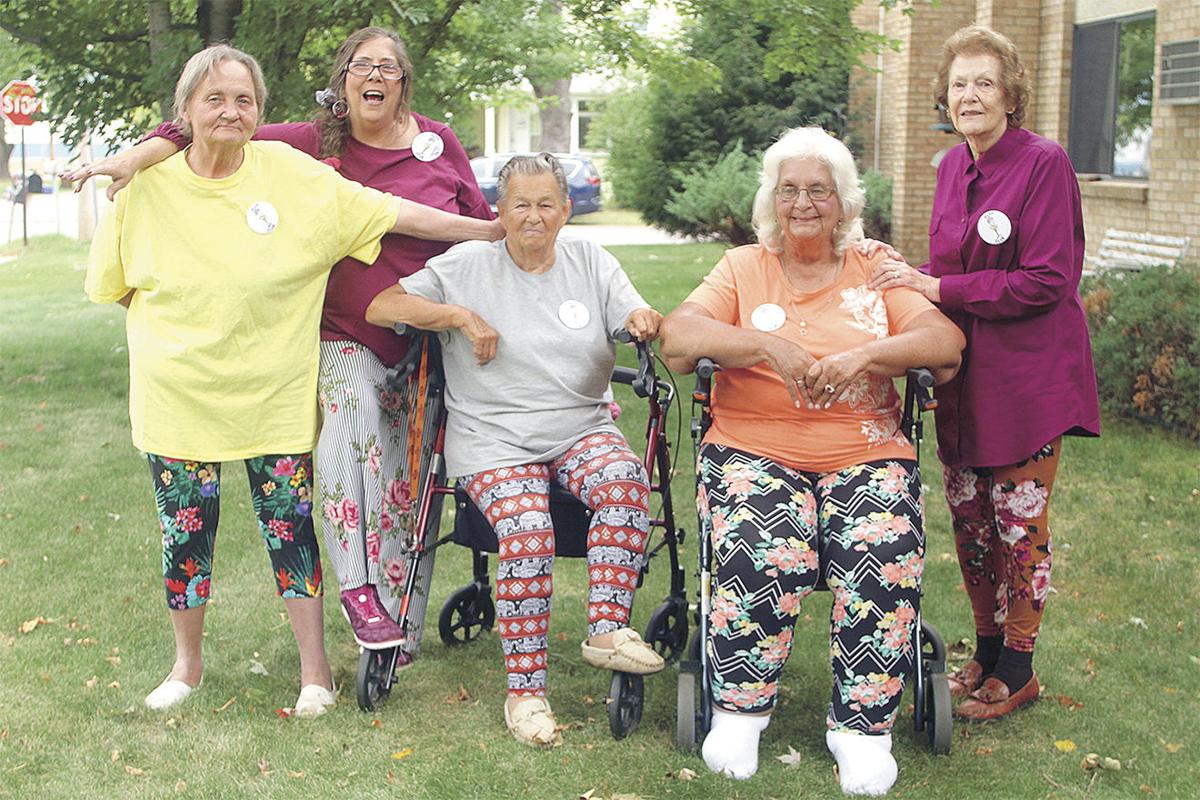 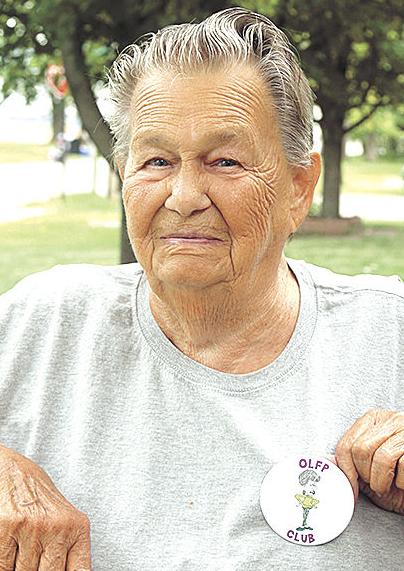 Upon entering the nondescript brown brick building, visitors are simultaneously struck by the smell of good food and sound of laughter coming from down the hall in the community room of the Ogilvie Square Apartments.

It’s been almost two years since 69-year-old Betty Segelstrom moved into her apartment building along with her 50 or so pair of what she calls her “fancy pants” leggings. Segelstrom and her pants caught the attention of others in the form of some playful teasing about her ever changing array of brightly colored pants.

It didn’t take long before she organized her friends into The Old Lady Fancy Pants Club. The club became a source of fun and companionship for a group of women for the past year and a half. They even had OLFPC buttons made which they all wear proudly along with their fancy pants.

The women try to get together about once a month, sometimes spur of the moment. There are always plenty of stories to be told, recipes to be swapped and smart phones passed around with photos of grandchildren and great-grandchildren.

Then there is the food: a wide variety of potluck dishes and (if they’re lucky) 86-year-old Muriel Scherle will show up with her famous rice pudding. The women make it clear that food isn’t really focus, it’s the companionship and connections that makes their get-togethers special.

Some of the ladies use walkers and struggle with mobility. When they are together they all help and support each other. Some are coping with health issues and the loss of loved ones and friends. It’s the support of friends that prompts 61-year-old Sonya Smith to drive over from Pine City and 63-year-old Marla Williams from Mora.

“It just feels good to be around these wonderful women,” said Smith.

When asked whether men are allowed to be part of the OLFPC, Segelstrom replied “Of course —as long as they wear their fancy pants.”

More than a fashion statement

What the women of the Old Lady Fancy Pants Club might not realize is the added benefits that their get-togethers have on each other.

One of the most serious challenges facing our aging population’s health and well being is social isolation and it affects seniors in rural areas the hardest. Research shows that older persons are likely to experience more psychological issues negatively impacting their well-being due to lack of social interaction. Put simply: people need people.

Physically, seniors who are more isolated have an increased risk of health problems including high blood pressure and depression. They also are more prone to be victims of elder abuse.

People who find themselves unexpectedly alone due to the death of a spouse or partner, separation from friends or family, retirement, loss of mobility or lack of transportation are at particular risk, the latter being made more critical in rural areas where public transportation is limited or nonexistent.

Data from the most recent census shows that Kanabec County has an aging population with as many as 25% over the age of 65. There are currently about 806,000 adults age 65 and older in Minnesota, making up about 15% of the population.

Two decades from now, that population is projected to top 1.3 million, and more than one out of every five Minnesotans will be an older adult.

The study showed the key issues in regards to senior isolation were the need for social connections and a desire for companionship. Many seniors expressed that they wanted to become involved in volunteerism but lack of transportation was a hindrance.

Conversely, people who engage in meaningful, productive activities with others tend to live longer, boost their mood and have a sense of purpose. Being with others helps overall well-being and often helps improve cognitive function, studies show.

Seniors who wish to become more social have options including attending senior dining programs and various life enrichment centers. Family Pathways can connect volunteers to visit seniors but they struggle to recruit volunteers.

Some ways for friends and caregivers to help seniors become less isolated would be to initiate an outing, ask to take them shopping or, have them try a class with you. Sharing a cup of coffee and showing that you care can have a positive impact on a senior living alone.

So when the Old Lady Fancy Pants Club gets together for companionship once a month in the Ogilvie Square Apartments party room, they are not only doing something important for their overall personal well being, but they are also doing a community service by combating senior isolation with laughter, friendship and a little rice pudding on the side.

The original version of this article and accompanying photos contained name errors. Betty Segelstrom's name was misspelled as "Fegelstrom." In the group photo, the person pictured second from the left is Marla Williams, not Sonya Smith as originally published.

The Kanabec County Times apologizes for this error. The Times is committed to accuracy. If you have a correction or clarification, please contact the editor either by phone at (320) 225-5128 or via e-mail at editor@moraminn.com.