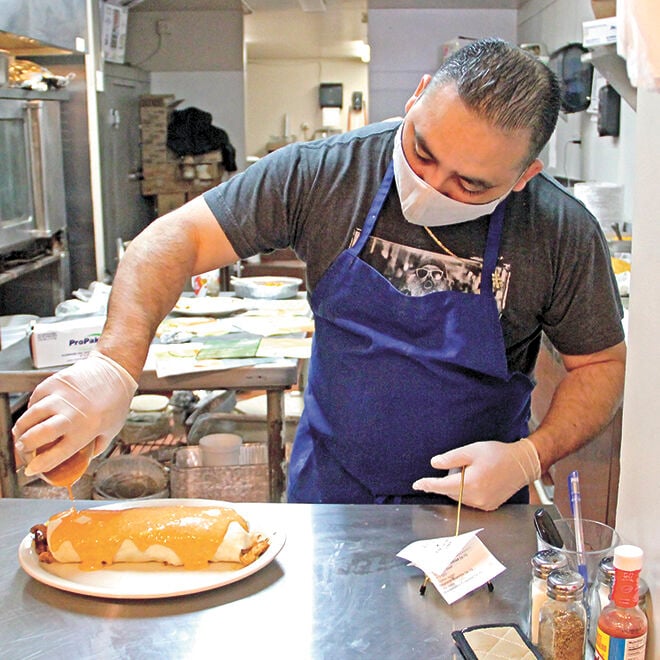 The size of a loaf pan and stuffed with chicken, steak, rice, beans, lettuce, sour cream and guacamole, then covered with chipotle cheese sauce and bacon, the “Big Mora” is El Jalisco’s largest burrito and has been a popular item during the restaurant’s opening week.

Jesse Rivera and her husband, Wilmar, said they met Campuzano while buying tacos from his food truck in Forest Lake. They learned Campuzano was looking to rent out the downtown Mora location.

The Riveras had previous restaurant experience and said it has been a dream to own a restaurant and build a better life for their kids.

This was their opportunity.

As they examined the opportunity in front of them and toured Mora, they noted the town’s food options consisted mostly of pizza and burgers. The Riveras decided Mora could use a little variety.

Joined by their friends Jesus Mena and Jeydi Alvarez, the Riveras opened El Jalisco on Feb. 10.

The restaurant’s name, “El Jalisco” (pronounced “huh-li-sko”) is named after the Mexican state by the same name where Jesse’s mother was born. The group decided the name both honored their roots and embodied the Mexican essence of their food.

Starting a restaurant isn’t easy. Right now, the Rivera’s are renting the building, working to make gradual renovations, commuting while looking for a home to rent in Mora and raising four children.

“It’s harsh, but like they say, life is not easy and you need to try your hardest,” said Jesse.

Jesus said that in order to be successful, “We need Mora’s support.”

Jesse said they have found Mora to be welcoming.

She grew up in California, but has spent the last 16 years in Minnesota.  Currently, she and her family live in Hugo and they are looking for a place to rent in the Mora area. She hopes the spring market will open up more housing options.

Immediately, Jesse said she noticed some stark differences about life in Hugo versus small-town Mora.

She had crossed the street to Ace Hardware, and before even introducing herself, the people there seemed to know who she was.  While the closeness and speed of chatter among neighbors isn’t unusual to Mora natives —it took Jesse by surprise.

“They actually act like they know each other,” she laughed. “They’re so friendly.”

Jesse said the people of Mora have been welcoming and they haven’t had any negative reactions. She described the community as “cute,” like something you might see in a movie.

While driving through town, deciding if this would be a good move for their family, Jesse said her four children were excited by the Kids Kingdom/Mora Lions Park, Mora Aquatic Center and especially the Paradise Theatre.

El Jalisco is currently serving both dine-in and take-out and are in the process of opening the bar portion of the restaurant for mixed drinks.