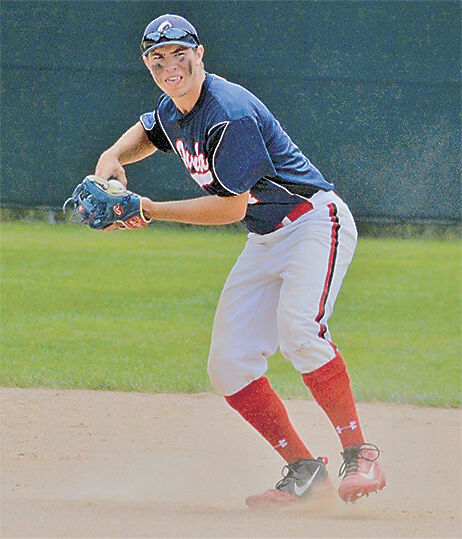 Cubs second baseman, Caleb Koch, fields the ball and throws it to first to get an out against Ramsey.

Cubs second baseman, Caleb Koch, fields the ball and throws it to first to get an out against Ramsey.

After earning a bye in the first round of the Region 1C Minnesota Baseball Tournament by finishing in second place in the Eastern Minny League North Division, the Quamba Cubs squared off with the No. 5 seed Ramsey Renegades on Sunday, Aug. 2, 2020. The Cubs came out on top in this one by the score of 8-0 behind the outstanding pitching performance of Chase Oslin.

Oslin had great command of his fastball and off speed pitches throughout this game resulting in seven and two-thirds innings of shutout baseball. Oslin breezed through the first seven innings before running into some trouble in the eighth inning. After retiring the first two batters of the eighth inning, a couple of Ramsey batters reached base on a couple of hits followed by a walk, and Oslin was then relieved by Logan Parker-Sjoberg. Parker-Sjoberg got Quamba out of this bases loaded jam by striking out Ramsey’s number three hitter. Parker-Sjoberg then pitched a scoreless ninth inning preserving the combined shutout.

The Quamba bats were also alive and well in this ball game as they collected 12 hits on the day. Leading the way in the hitting department was second baseman, Caleb Koch, who had an outstanding day at the plate with a double and three singles. Parker-Sjoberg also had three singles and also hit a deep drive to left field that bounced off the glove of the Ramsey left fielder. Catcher, Kevin McFerran, also contributed a couple of hits including a solo home run to deep right center. McFerran had three RBI’s on the day. Right fielder, Justin Krie, added a couple of hits, a double and single, and played shortstop. Lucas Athey Jr. had the other Quamba hit, a single.

Defensively, the Quamba ball team played great defense throughout the game. The lone error came on a great play by second baseman, Koch, who snagged a line drive and attempted to double off a Ramsey runner on first base but the throw to first had to be rushed and was just a bit off the mark.

Moving forward, the Quamba Cubs will get another opportunity to try and knock off Region 1C powerhouse Mora at 5:00 p.m. on Sunday, Aug. 8 at Brennan Field in Hinckley.

Over the past three seasons the young Quamba ball team has been able to compete well against a veteran Mora team but just has not been able to find a way to score enough runs to get over the hump.  Mora has one of the best pitchers in the league in Derek Graves who has stymied the young Cubs in the past. Oslin and Parker-Sjoberg are also fine pitchers, and if they do what they are capable of and Quamba’s defense continue to play the way they have been, this could be great ball game.