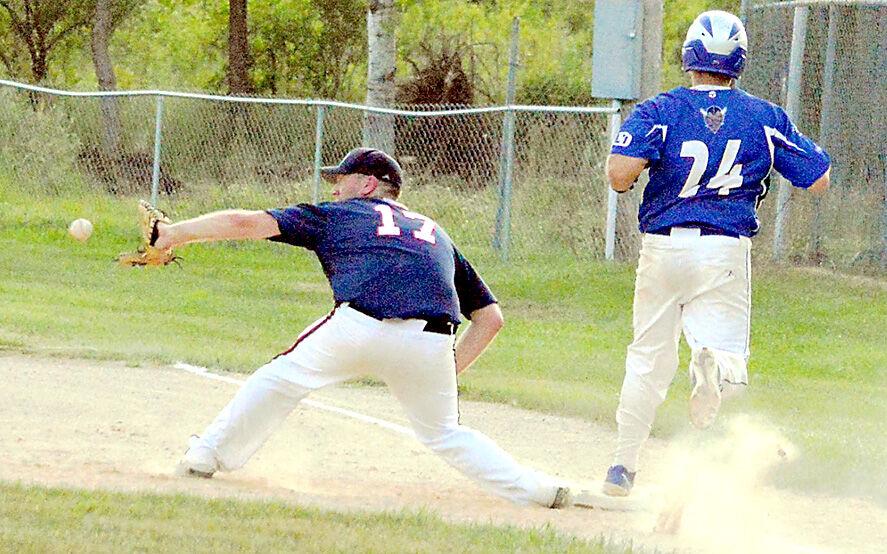 Mora Blue Devils Derek Graves is safe in a close call at first base as Quamba Cubs Brandon Schmidt receives the throw. 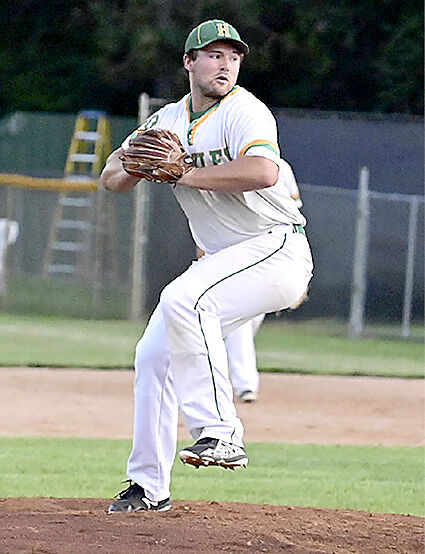 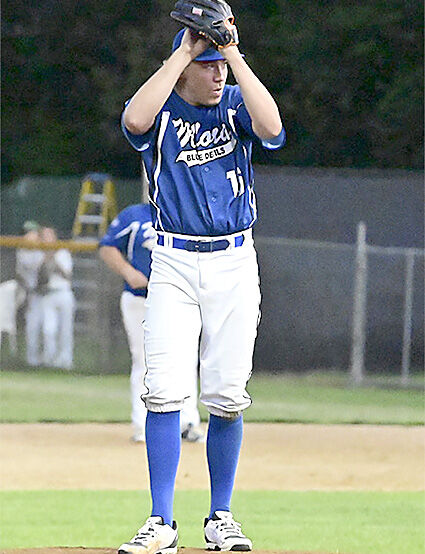 Mora Blue Devils Derek Graves is safe in a close call at first base as Quamba Cubs Brandon Schmidt receives the throw.

The Mora Blue Devils went 4-0 last week in Eastern Minny play to put themselves in position to win the regular season North league title. Mora defeated Hinckley 7-5 in 16 innings, defeated Quamba 6-0 and swept a doubleheader from Braham by the scores of 8-0 and 10-0.

On Wednesday, July 15, Mora traveled to historic Brennan Field in Hinckley for what turned out to be a historic game.  The longest game in Blue Devils history ended in 16 innings with the Devils prevailing 7-5.

The game started as a pitcher’s duel being scoreless through four innings. Hinckley broke the ice in the fifth inning by scoring three runs. Mora answered right away in the sixth inning with two runs. Brian Kiel drove in Derek Graves with an RBI single. A fielder’s choice by Wyatt Foss brought in Darin Ericskson to cut the deficit to one run.

Mora tied the game up in the seventh inning. Bryce Norby hit a sacrifice fly to center bringing in Logan Graves to make it 3-3.

In the ninth Mora took the lead 5-4. Michael Humphrey led off with a single. Derek Graves drove him in with a triple. A bad throw to third allowed Graves to score to put Mora up by one.

The Knights tied the game up in the bottom of the ninth. After Norby allowed two Knights to reach base Derek Graves came in to try and slam the door. He walked in a run before getting out of the jam, and the game headed to extra innings.

Ryan Van Someren took over in relief for Mora and was fantastic. He pitched seven no-hit innings while striking out 10 batters. That allowed for the heroics of Bryce Norby.

In the top of the 16th inning Norby hit a two-run homer after Derek Graves reached on a single. Van Someren slammed the door, and the Blue Devils got a big win.

On Friday, July 17, Mora traveled to Quamba to take on the Cubs for the second time in less than a week. A big crowd saw pitcher Derek Graves lead the Devils to a 6-0 victory. Graves went the distance striking out 14 while allowing just two hits and one walk.

Mora took the lead in the top of the first inning. With the bases loaded Darin Erickson was hit by a pitch.  That brought in Derek Graves to make it 1-0.

In the second inning Graves was once again involved in the scoring. He grounded out into a fielder’s choice bringing in Brandon Kiel to make it 2-0.

Mora extended the lead in the fifth inning. Wyatt Foss had an RBI double bringing in Troy Jones. Later in the inning Logan Graves singled bringing in Foss to make it 4-0.

Single runs in the seventh and ninth innings made the final score 6-0. Logan Graves was three for four while Derek Graves, Bryce Norby and Troy Jones each had two hits.

Sunday, July 19, Mora hosted Braham in a doubleheader and came away with a convincing sweep of the Snappers by the scores of 8-0 and 10-0.

Game one saw Logan Graves toe the rubber who went the distance allowing just three hits while striking out six.   Graves helped his own cause in the bottom of the first inning by hitting a solo home run to make it 1-0.

Mike Schnabel drove in a run in the fifth inning, and Derek Graves scored on a wild pitch in the sixth for the final margin.

Mora put the game away early with a seven run second inning.  Derek Graves had a two run RBI single during the uprising.

With the wins Mora is 8-3 overall and 5-0 in the Eastern Minnesota North League. The Blue Devils close out the regular season with games against North Branch at 7:30 p.m. on Wednesday, July 22 in Quamba, Saturday, July 25, at 2:00 p.m.