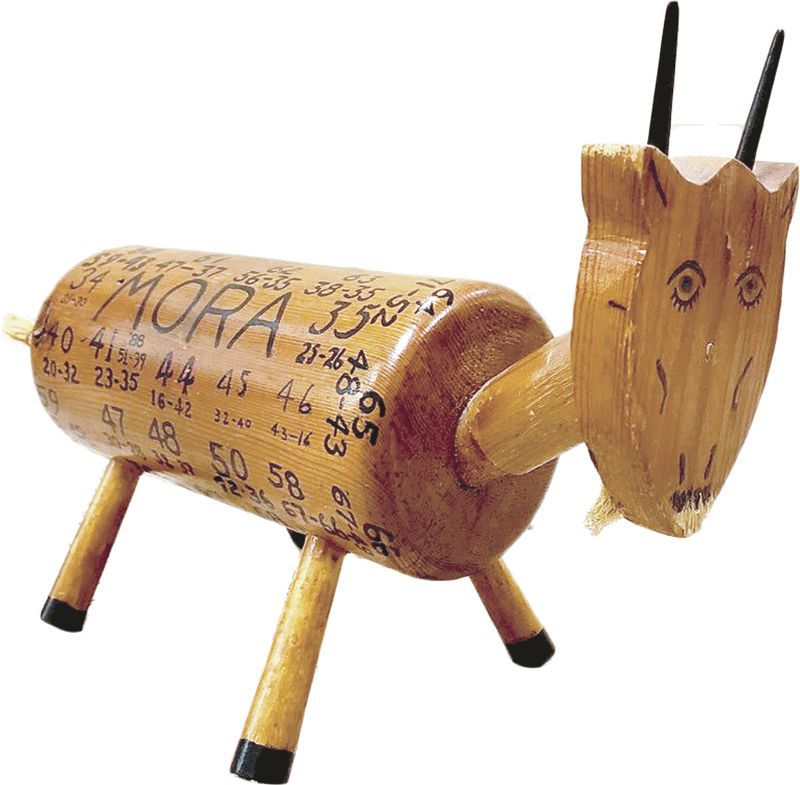 The Goat, built in 1934, is housed in Mora’s district office. 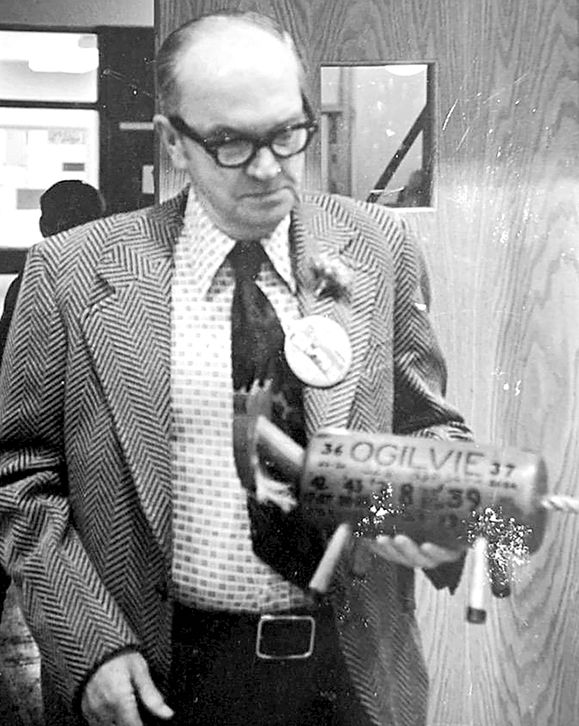 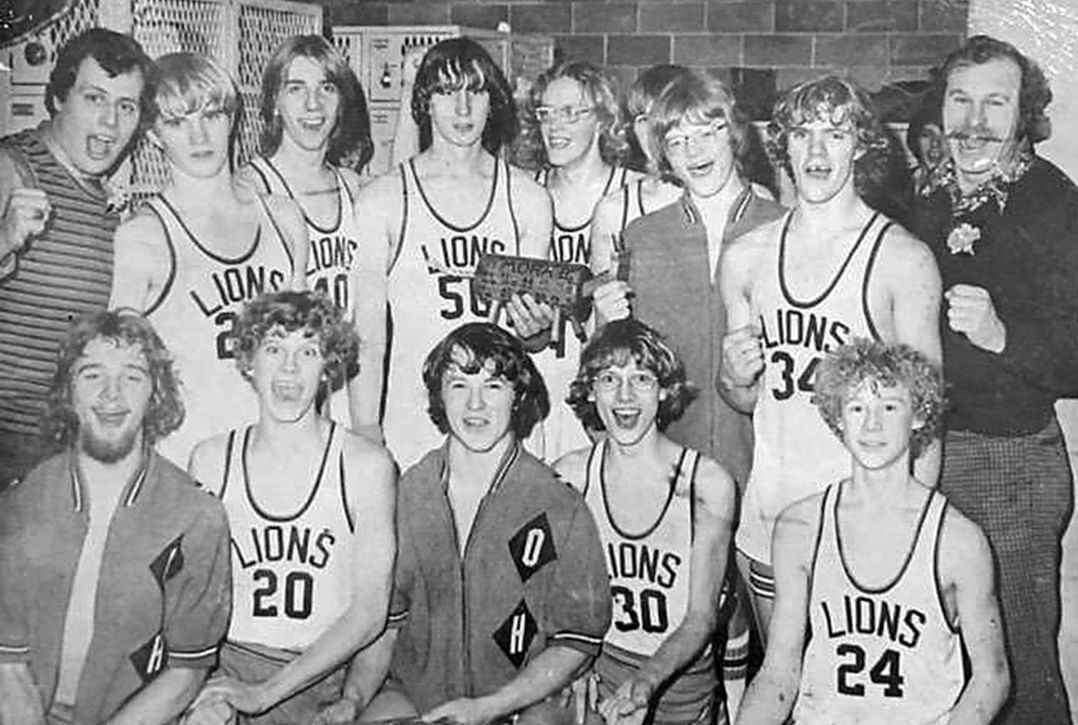 The Goat, built in 1934, is housed in Mora’s district office.

Mora and Ogilvie high schools used to play for a traveling trophy in boys basketball: the goat.

The “Goat Game” started in 1934 between the two schools. An excerpt from a 1939 program indicates the origin of the goat game: “An idea was conceived at Mora that has helped materially to stimulate sportsmanship and cement the friendship of the Mora and Ogilvie High Schools. A ‘Goat’ was produced whose ownership bears the same significance as the ‘Little Brown Jug’ of the University of Minnesota and Michigan does.

“The goat remains in the possession of the school whose team commands the victory at the annual ‘Goat Game’ as a symbol of that team’s prowess for the year. To date, the ‘Goat’ has spent two years of its lifetime at Mora and three years at Ogilvie. Its home for the coming year – uncertain.

“If this little odd-shaped wooden image can instill in the general public the same feeling of friendly rivalry and sportsmanship as that prevalent in the two high schools – a toast to our little bewhiskered friend, ‘The Goat’.”

An excerpt from the 1944 Kanabec County Times stated, “The goat game idea was instituted by the student council of Mora in 1934. This far-sighted group decided it would be fun to see which team could get the other’s goat. The goat was then made by Otto Irene to fulfill this idea.”

Carleton Molin, a 1954 graduate of Ogilvie High School on his memories of the “Goat Game,”

“I think the reason this was such a rivalry is two-fold. These school districts are adjacent, and the towns are close together—nine miles. Both schools were members of District 16 in the athletic conference structure in the state. The district included Mora, Ogilvie, Milaca, Onamia, Isle, Braham, Cambridge, Princeton, St. Francis, Osseo and Elk River. It was a combination of large and small schools which led to the single class state tournament. So, the fact that you were a small school provided a great incentive to compete favorably with larger schools. The greatest example of this is the Edgerton team winning the state tournament in 1960. In 1953, Ogilvie defeated Cambridge in the playoff semifinals which was a huge upset, at least in the minds of Cambridge fans. Incidentally, that game was played in Mora’s beautiful new gym with a crowd of around 1,000 people on hand. Quite a thrill for the boys from Ogilvie.”

During that stretch Mora did not have a team finish above .500. Then, enter Joe Lutz, and things turned quickly.

Coach Lutz took over in 1958 and coached through the 1974 season. Lutz also went on to be long time athletic director in Mora and also was the head baseball coach. During his 17-year tenure Mora only finished below .500 one season, 1974. Lutz is the longest tenured and winningest coach in Mora’s boys’ basketball history. In his first year he led Mora to its only state boys’ basketball appearance.

The rivalry turned sharply in Mora’s favor. Mora won 16 consecutive Goat Games from 1958-1973. The two schools did for a time play twice a year with the second meeting being the “Goat Game.” In fact, in 1966 Ogilvie did beat Mora in their first meeting, but it wasn’t in the “Goat Game.” An excerpt from the 1966 paper stated, “In the first meeting between the Mustangs and Ogilvie on the Lion’s court, the Ogilvie team pulled a mild surprise by edging the Mustangs by a 58-55 score.”

Head coach Joe Lutz on the “Goat Game” said, “It was a big deal to play Ogilvie on a Friday night. They were tougher than heck. Our auditorium was packed to the rafters, and we had to sit people around the edge of the court. We couldn’t get all the people in the crowds were so darn big.

“As the winning streak went on Ogilvie wanted it more and more. It’s easier to keep a streak going than to break a streak.”

Craig Oslin, a 1972 Mora graduate had the pleasure to play for Coach Lutz. Oslin stated, “The thing I remember most is that we didn’t want to lose to Ogilvie. Coach Lutz was an excellent coach. He did things before they were common, such as playing a real up-tempo type of game.”

From 1964 to 1970 Byron Lindaman was the Ogilvie boys’ basketball coach. He remembers the “Goat Game” as, “A great tradition. My best memory was the jam-packed gyms. They had to set up bleachers on the stage in Mora. You have to remember that back then there was only one class. Mora and Ogilvie were in the same conference and district, so it was an important game.”

Ogilvie: Win back that goat

A young coach took over in Ogilvie in 1972, Greg Mjelde. When hired he got a directive from then Superintendent Chet Holje, “win back that Goat before I retire.”

Mjelde’s teams fell short in 1972 and 1973, but the streak finally ended in 1974 and Ogilvie got the goat back with a 63-60 win. Mjelde remembers the series as, “Emotional. It meant a lot to the community and school. It was the biggest game of the year. It was by far the largest crowd of the year we’d play in front of. We broke the streak in 1974 in Mora, and I remember that auditorium being packed. They had to sit people on the stage.”

“Back then the Goat Game was a pretty big deal for those of us in Ogilvie. It had sort of a David vs. Goliath feel to it and was especially memorable because Ogilvie won the game in the 1973-74 season for the first time in 16 years.”

By 1975 the Mora School had grown to be much larger than Ogilvie, so winning that game, at Mora, was the biggest thing that year, and for quite some time after that. Even though we were playing in different conferences at this point because of our size difference, it seemed like winning that game sort of revived the rivalry for a time. It really became a ‘community’ experience for us at the time.”

Bill Heitkamp had nine very successful years as head coach in Mora. From 1978 to 1986 he only had one losing season. He remembers the Goat Game as “A big fan game. Greg’s teams were always ready to play, and they played tough defense. It was a game that was always ‘circled’ on the schedule.”

In the final years the rivalry had lost some of its luster. Mjelde said, “Back in the earlier days of the rivalry Ogilvie was the smaller school, but the enrollments of the two schools wasn’t as wide as it is today. Enrollment started to diverge. Mora and Ogilvie did more together, such as the vocational-tech school. So, the kids knew each other a lot more. It just got to the point where Mora was getting too big.”

Ogilvie did find a way to stay competitive in the later years of the rivalry. Ogilvie won the goat in 1988 by a score of 61-57. In 1989 Mora had a tough season going just 3-18, but according to the year book “the highlight of the season was winning the Goat back” as Mora won 45-44.

It appears that 1989 was the last year the “Goat” changed hands. The Lions defeated the Mustangs in 1991 by a score of 70-64, but it’s unclear if the goat changed hands. So, by all accounts it appears 1989 may have been the last true Goat game.

Today, the Goat is in the Mora district office resting in the vault.

The “Goat Game” is now only a memory, but a fine memory for the many players and coaches that participated. Today, Mora and Ogilvie are combined in a successful swimming and diving program. The only sport the two schools currently compete against each other in is girl’s basketball. But, the two schools will always be paired in history with the “Goat.”

This is a tremendous blast from the past. Thank you!

One fact that folks might not be aware of that in the old single-class days (until 1970), Mora (and Ogilvie, I believe) were all in District 16. That district also included Anoka, which at the time was one of largest, if not the largest, school in the state.

To even get to regionals was a tough, tough road.