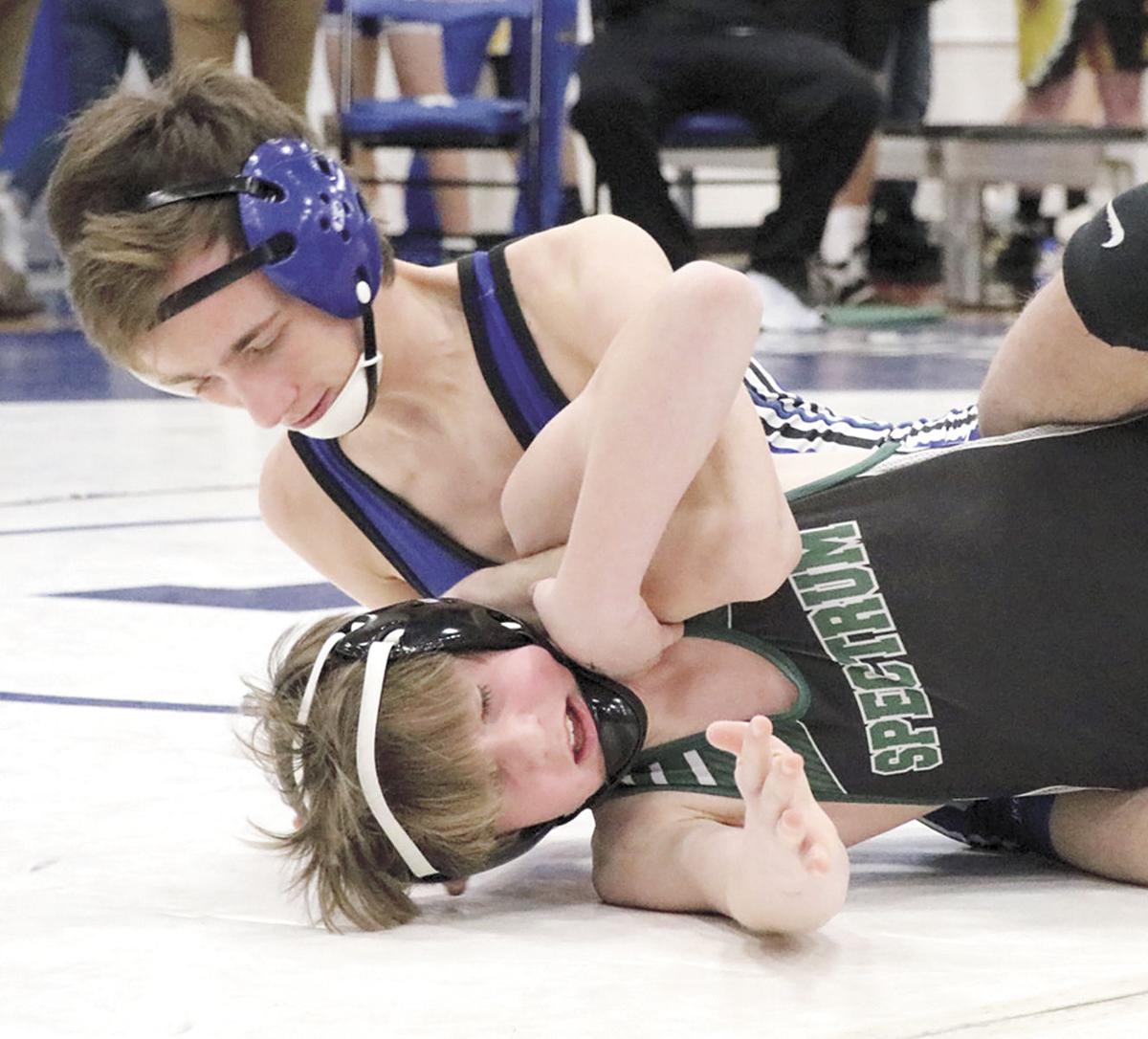 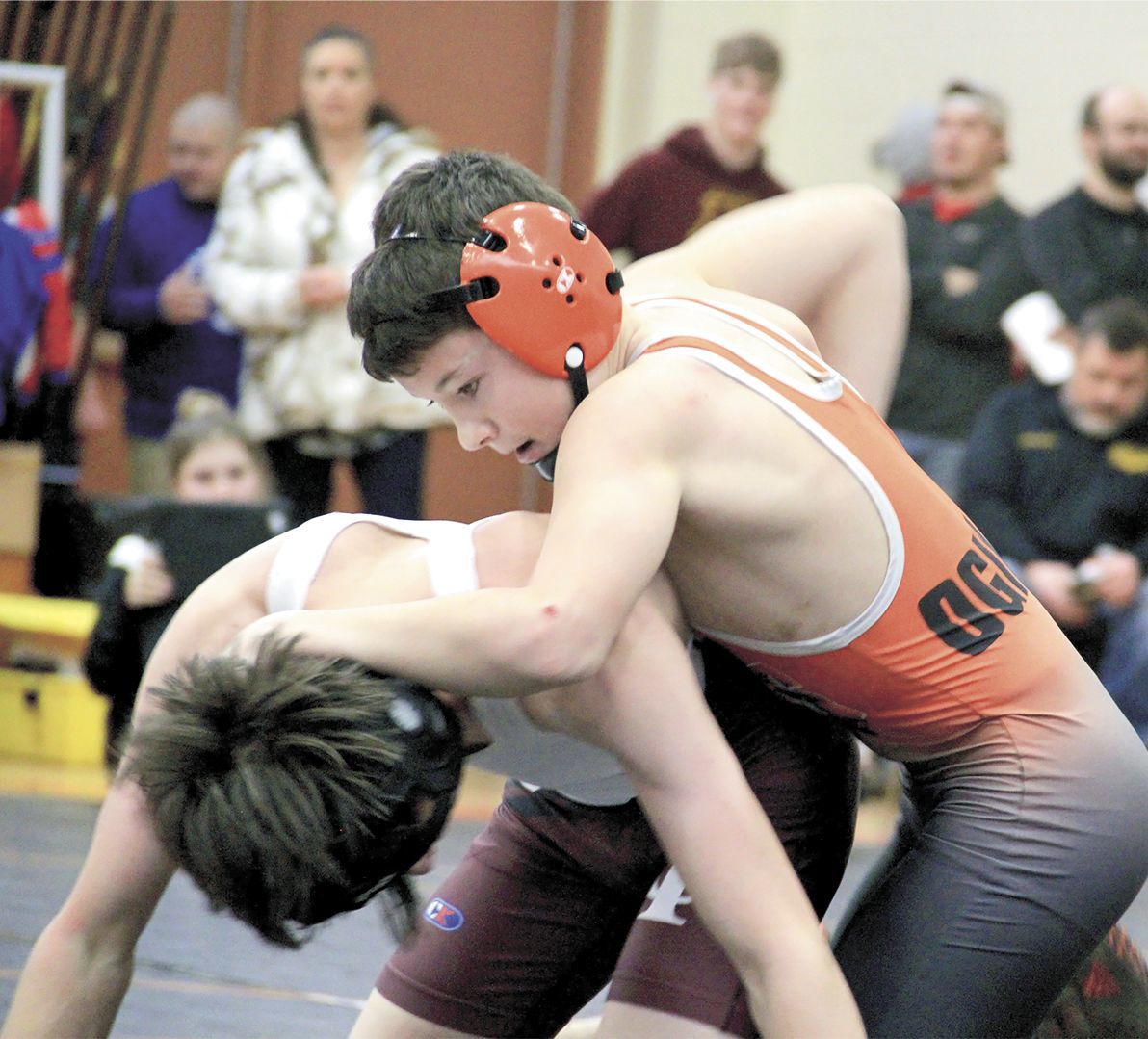 Ogilvie wrestlers in light weight classes are encouraged to aim for a body composition of 7-10% body fat.

Ogilvie wrestlers in light weight classes are encouraged to aim for a body composition of 7-10% body fat.

On the morning of two wrestling tournaments hosted Jan. 4 in Mora and Ogilvie, wrestlers, parents and coaches prepared for the upcoming matches. As the athletes snacked on fruit cups and bagels, they asked each other the big question: “Did you make weight?”

While body size and weight matter in other sports, none so much as wrestling. Wrestling is the only high school sport at Mora or Ogilvie that uses weight classes. The Minnesota State High School League has 14 weight classes, ranging from 106-285 with gaps as small as seven pounds between the lower classes.

Compared to other sports, wrestlers particularly benefit from having lean body compositions. Ogilvie wrestling Head Coach Adam Halvorson said he encourages his team to maintain a body composition of 7-10% body fat, explaining a wrestler will have the advantage if most of their weight is in muscle, compared to a wrestler in the same class who’s weight is in fat.“The purpose is to be lean,” he said. “It’s about getting your body to perform at the best possible level.”

For small schools, finding enough athletes to participate with the right variety of body types to fill all 14 classes can be a challenge. For example, if three varsity wrestlers on the team weigh 160 pounds, only one can wrestle in the 160 pound class. In order to wrestle, the other two will either have to move up a class, or lose enough to move down a class. It’s that or they are bumped down to junior varsity.

At the start of the wrestling season, each athlete is given a physical by a doctor. The doctor uses a skin fold test to determine the athlete’s body composition, and gives them a minimum weight they can safely reduce to approximately 7% body fat.

To reach that lean body composition, both Mora and Ogilvie wrestling programs offer advice, consult with parents and distribute handouts full of information on how wrestlers can manage their weight with healthy meals, staying hydrated and avoiding junk food.

Youngblom said following that advice is still up to the athlete and teenagers sometimes opt for less healthy ways of staying within their weight class.

While coaches encourage healthy eating and proper hydration, the pressure to fit within a weight class leads some athletes to unhealthy practices commonly called “cutting weight.”

Youngblom remembered his own college wrestling days when he deprived himself of food and water while sitting in sauna’s before weigh-ins. Since 1997, league rules changed by banning sauna suits and added regulations for safety. The annual skin-fold test and minimum qualifying weights for individual wrestlers is one such attempt to discourage unsafe weight cutting practices.

Mora wrestler Avery Nelson wrestles in the 120 weight class and is one person on the team who had to reduce his weight to fit within his class. His minimum weight established during his season physical was 110.9 pounds.

On the morning of Dec. 31 during a scrimmage against Pine City, Avery weighed 126 — six pounds over.

Nelson said to reduce his weight he doesn’t do anything “drastic” — simply taking it easy on food and exercising.

“I run a lot,” he said, sometimes with warm clothes on to sweat it off. When it comes to staying away from the pantry, “Chewing gum helps.”

Coach Adam Halvorson said when a young man decides to limit his portions at the dinner table, it looks odd to others in a society that is used to over-indulgence. However, Adam said this self- discipline and mindful eating is healthier than a culture of obesity.

“They are controlling their body weight to a healthy level,” he said.

However, wrestlers who skipped a meal before weighing in tend to binge directly after, sometimes choosing junk food from the concession stand.

To discourage unhealthy binges and fuel up their athletes, parents work with coaches to provide a healthy meal for athletes after their weigh in. Meals are usually a deli meat sandwich, fruit and a granola bar.

“We take every meet as an opportunity to model the healthy thing to do,” said Adam.

Kim Halvorson is mother to an Ogilvie wrestler, Landen Halvorson. Landen wrestles in the 195 weight class.

“He has to watch what he eats, but doesn’t have to starve,” said Kim. She said her son is self-disciplined when it comes to maintaining his weight, but sometimes not getting to eat as often or as much as he would like makes him grumpy.

“Wrestling is hard. You see so many kids that need to cut weight. As a mom, I just want to feed them,” she said. She and her husband Aaron pay close attention to Landen’s habits. Kim said she prepares healthy meals and makes sure he drinks plenty of water and stays hydrated. Wrestlers that don’t eat or drink have poor performances on the mat.

“You can see the kids who aren’t’ doing it right,” Youngblom said. Athletes that aren’t nourishing their bodies become tired and lethargic too soon during practice or a match. “You can’t drive a car with no gas.”

Wrestling is an intimate sport that can be both physically and emotionally hard. From inspections for skin diseases, singlet uniforms and an intense focus on weight the nature of the sport demands wrestlers have a lot of self-confidence in their bodies.

“This is a brutal sport,” said Youngblom. “Sometimes they wrestle ‘till they throw up and cry. It’s not fun.”

Youngblom concluded that negative stigmas about cutting weight are self-destructive to the sport and discourage participation. Therefore, the coaches are dedicated to minimizing those pains and encouraging reasonable weight management.

“The worst part of our sport is cutting weight,” he said. “It’s the black-eye of the sport.”