With two outs and bases loaded Damon Rademacher hit to deep short which was fielded by a North Branch player, but he threw wide to third base and allowed the winning run. Mora wins 2-1 in 11 innings. 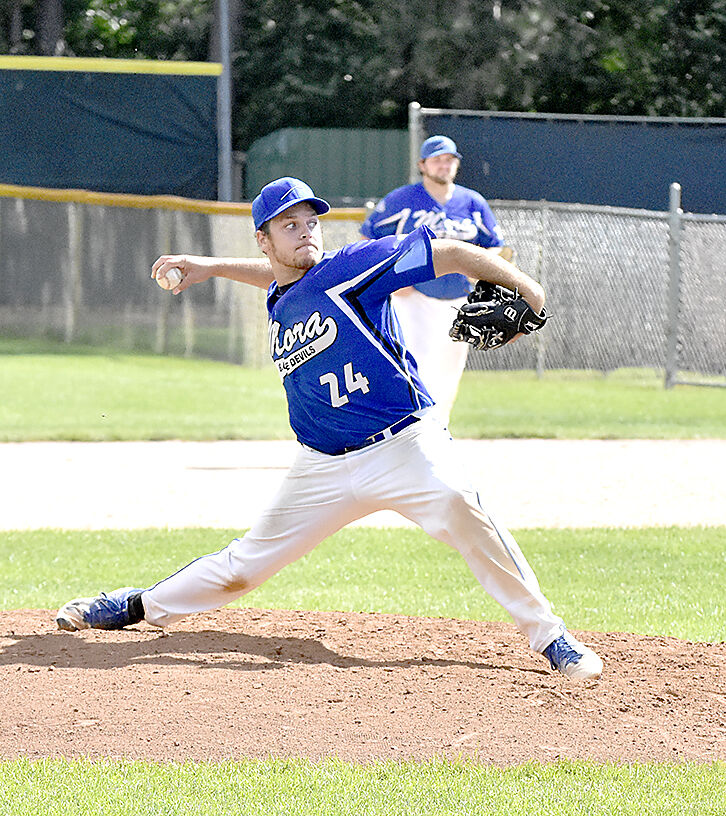 With two outs and bases loaded Damon Rademacher hit to deep short which was fielded by a North Branch player, but he threw wide to third base and allowed the winning run. Mora wins 2-1 in 11 innings.

The Mora Blue Devils started Region 1C tournament play Sunday, Aug. 2, at historic Brennan Field against North Branch. The top seeded Blue Devils got all they could handle, but came out on top with a thrilling 2-1, 11 inning victory.

Heading into the game it figured to be a pitcher’s duel. Starting pitchers Jimmy Skroch for North Branch and Derek Graves for Mora didn’t disappoint.

North Branch broke through first in the fifth inning. Skroch hit a one out double. That was followed by the only Devils’ error of the game. Graves got a big strikeout for the second out, but a wild pitch brought in the first run of the game.

Mora evened the game in the bottom of the sixth inning. Jim Woolhouse led off the inning with a walk. Logan Graves bunted him over to second base. Jake Carlson then delivered the game tying hit scoring Woolhouse. The Devils threatened to take the lead on a Troy Jones single, but Carlson was thrown out at home and the score remained 1-1.

After North Branch scored in the fifth inning Graves settled in. He allowed only four more base runners the rest of the game. Graves finished the game going all 11 innings allowing just five hits while striking out 15 and walking just two.

Mora threatened to take the lead in the seventh inning. Brian Kiel and Damon Rademacher each reached base with one out. After a passed ball they were on second and third with two outs. Skroch got a big strikeout to end the inning.

The Blue Devils wouldn’t threaten again until the bottom of the 11th inning. Mora loaded the bases with two outs against a Nighthawk reliever. Rademacher hit a ground ball between shortstop and third base. Pinch runner, Mike Schnabel, just beat the throw to third base and Bryce Norby scored the winning run.

Rademacher led the way at the plate with two hits. Jake Carlson, Derek Graves, Bryce Norby and Troy Jones each had one hit.

The victory moves Mora to the next round of the Region 1C tournament. Mora will take on the Quamba Cubs at 5:00 p.m. on Sunday, Aug. 9 in Hinckley. Lots of Mora baseball talent will be on display when these two teams meet.

Get to Brennan Field early and cheer on your favorite team. For more information go to easternminny.com.