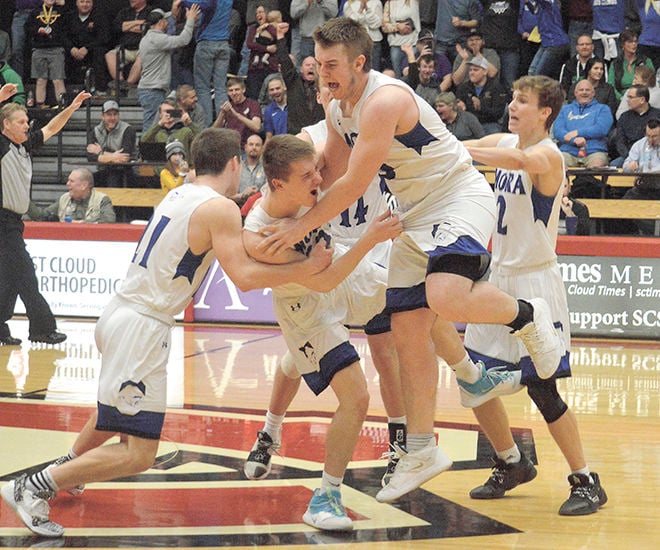 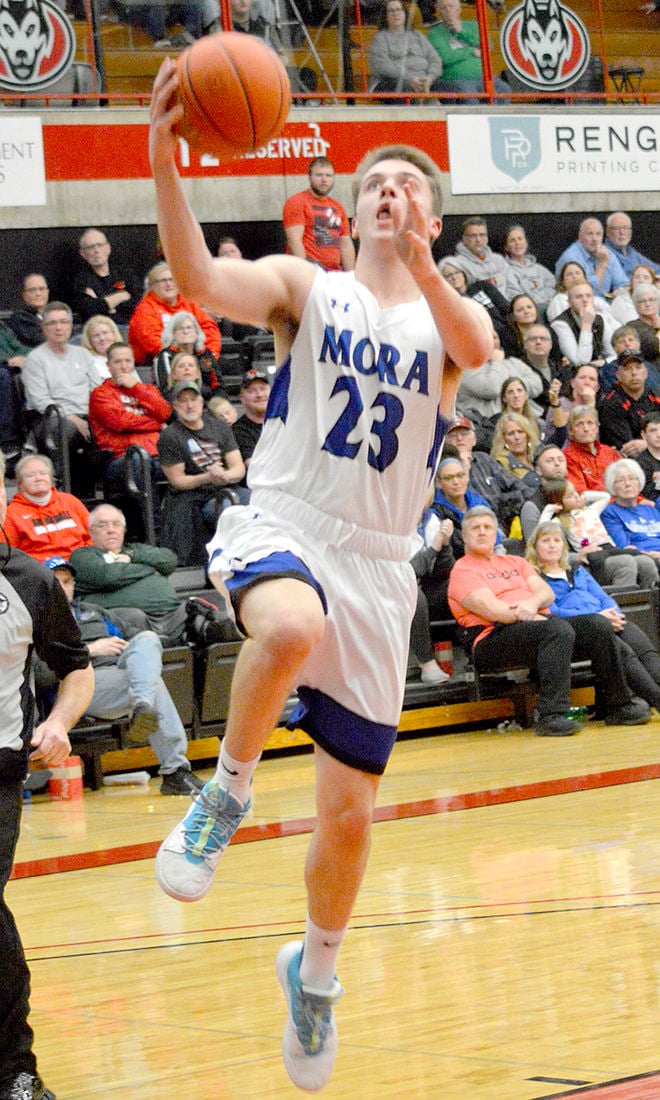 Senior Lucas Athey up for a fast break lay up against Annandale Cardinals.

Senior Lucas Athey up for a fast break lay up against Annandale Cardinals.

The Mora Mustangs boys’ basketball team ended the regular season with a fine 19-7 record playing in the tough Granite Ridge Conference. The team received the No. 6 seed for the section 6AA tournament. The boys defeated Spectrum March 5, 82-64 and then showed their record was no fluke by defeating No. 3 seeded Annandale on Saturday, March 7, at St. Cloud State University 67-64.

The No. 11 seeded Spectrum Sting showed some feistiness Thursday night and were no push over. The first half proved to be a back and forth affair as the Sting hit a number of deep three pointers. A little run at the end of the first half had the Mustangs up 39-34 at halftime.

Mora showed their fine depth in the second half and slowly wore down the Sting. The Mustangs hit their share of three pointers and got fine inside play from Cole Steffen. The boys gradually pulled away to advance to the next round of the tournament.

Head coach Curt Grachek said, “It was nice to have a home playoff game. It was the first one since 2016. Our focus was to keep their top scorer in check. He had been averaging 23 points a game. We held him to 11 points, so we did a good job of that.”

Mora’s second round opponent, Annandale, entered Saturday’s game with a 20-7 record playing in a very good Wright County Conference. Mora had to play one of its best games of the season to pull the upset and they did just that.

From the opening tip the Mustangs showed they would not back down against the bigger Cardinals. Mora controlled the inside presence Annandale possessed by playing physical and thus controlled most of the first half. Mora’s biggest lead was 26-16 before a late run by Annandale cut the Mora lead to two points, 28-26 at halftime.

Coach Grachek said, “We did a great job on their big guy. We weren’t intimidated and didn’t back down.”

The second half saw Mora continue to control the game and once again they were able to extend their lead out to double digits about half way through the second half. Annandale then started to chip away at that lead as time started to tick away.

Mora could have salted the game away late by hitting some free throws, but the Mustangs couldn’t convert keeping the Cardinals hopes alive. With 11 seconds left in the game Annandale hit a three pointer to tie the game 64-64. Mora pushed the ball into the front court and called time out. The Mustangs executed beautifully out of the time out and Lucas Athey found himself wide open to hit the game winning three pointer at the buzzer sending Mustang nation into a frenzy.

“One of the keys to the game was controlling tempo. We wanted to run on them and try to wear them down. They were only averaging 55 points a game, so we thought if we could get to 60 we’d win the game. Lucas hit a great shot, but the team did a nice job out of the time out and Ben Wright did a nice job of drawing Annandale’s attention and finding Athey for the shot.”

Jeff Lilienthal played a fine game in leading the Mustangs in scoring with 15 points. Wright and Steffen each scored 14 points. Athey had 10 points and Garrett Honstrom had 6. Another balanced scoring attack which has been one key to Mora’s success all season.

Mora’s next opponent is a familiar foe in the Pine City Dragons. The Dragons are the No. 7 seed and pulled an upset of their own defeating No. 2 seeded Osakis on Saturday 81-73. Pine City has an impressive 26-2 record, but one of those losses was to Mora earlier in the season by a score of 63-61.

On the game Coach Grachek stated, “Pine City wants to go, go, go. They play up tempo and want to shoot a lot of threes. Selective tempo will be the key for us. We’ll look for our transitions, but if we have to we’ll pull the ball out and run our offense.”