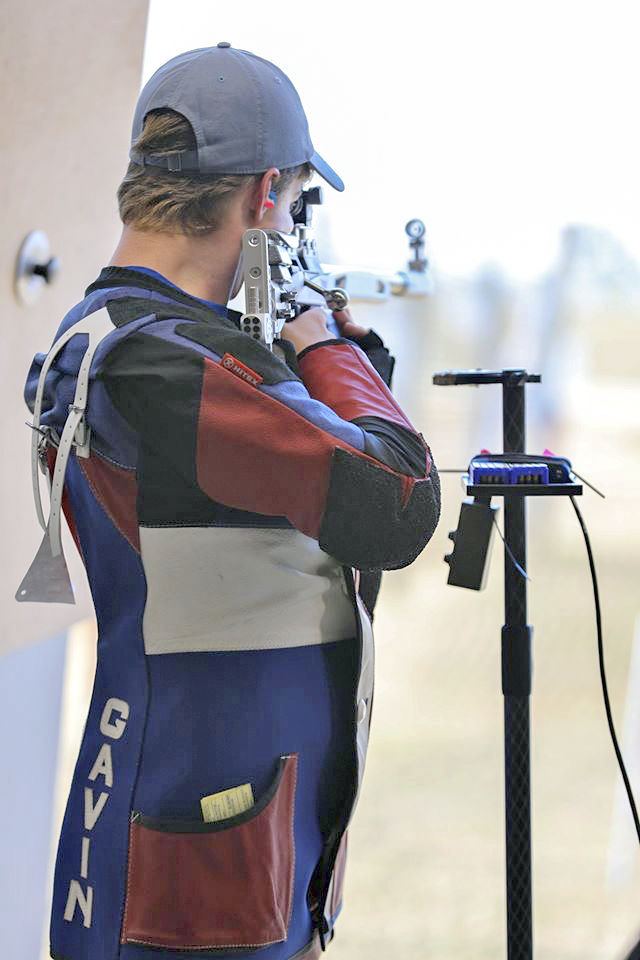 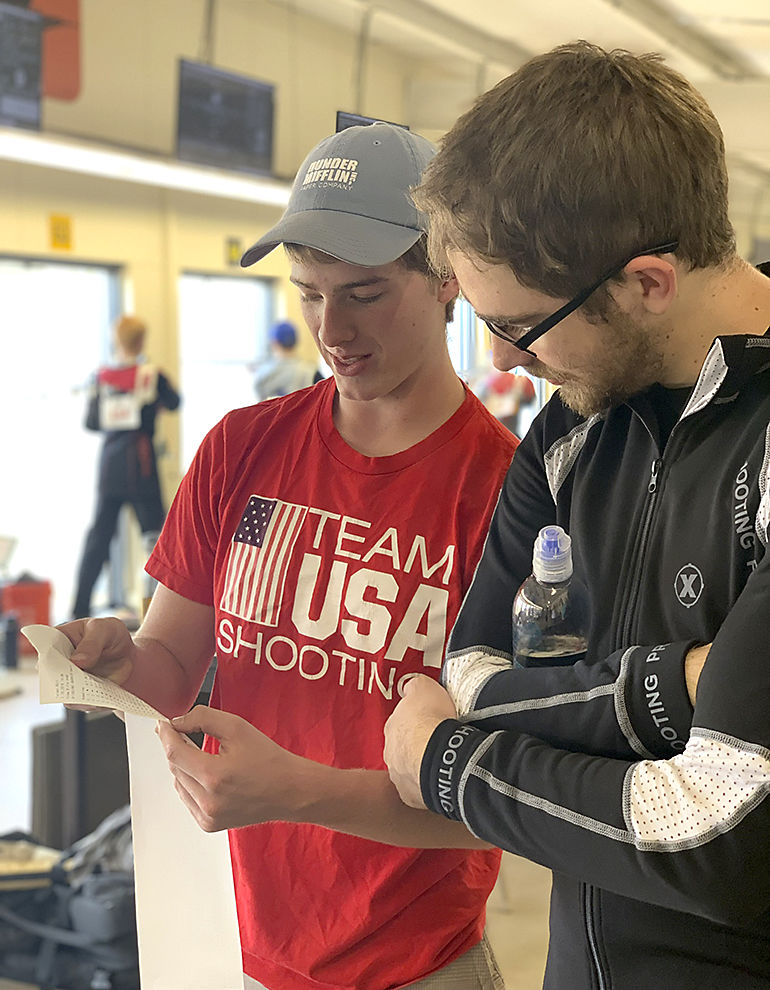 After shooting 1170/1200 at Fort Benning, Gavin  assesses and analyzes the results with coach and Olympian Lucas Koziensky.

Last fall a Mora teenager set a National Rifle Association shooting record that had stood since 2002. Achievements like this are the result of his focus and hard work, and could lead him to the 2024 Summer Olympics in Paris.

Gavin Barnick, age 16, lives with his family outside of Mora. A home-school student, he is part of Mora High School’s track and field team and Future Farmers of America (FFA) chapter.

In late 2018 Gavin took part in the NRA’s four-position small-bore competition. He scored 786 out of a possible 800 points, breaking the 2002 record for his age group. Not one to rest on his laurels Gavin again took part in the event early this year, and broke his own record by scoring 798.

In eighth grade Gavin joined Minnesota Centershots, a junior club rifle team based in Anoka. That winter he participated in his first national competition in Fort Benning, Georgia, and made the junior air rifle finals.

Gavin said shooting sports are a challenge, both mentally and physically. “In September at the Olympic trials in Georgia, I competed against the top shooters in the country,” he said. “On the first day I shot my average score. But on the second day I put less pressure on myself, and finished with a score of 1170 out of 1200. The last 16-year-old to make that score went on to win three Olympic medals and well over 10 World Cup competitions.”

“It’s kind of cool to know that people were shooting these high scores 20, 30 and 40 years ago, and that now I’m coming through and shooting the same scores as them.”

Shooting sports competitions involve a lot of family travel, said Gavin’s mother April Barnick. “He’s met a lot of great kids from across the country, and I’ve made a lot of good friends too. The parents are very interactive. It’s a family thing; when you get to the level Gavin is at, it’s a big time commitment. We enjoy every minute of it.

“As much as I want to be involved, once we’re at the shooting range I’m off duty. The kids are in charge of themselves; they drive the bus. The parents don’t touch the equipment - that’s kind of a golden rule.”

“This is really one of the safest sports there is,” Gavin said. “As far as I know there’s never been any injuries from this style of shooting. Eye and ear protection are required at the beginning levels, and ear protection is required as you advance further. And there’s a lot of learning about firearm safety before you even get to handle a rifle.”

Gavin’s goal is to qualify for the 2024 Olympics, and his coach Lucas Koziensky is a former Olympian. “Lucas lives and trains in Colorado Springs. I try to fly out there a few times a year, and we cover a lot of things over the phone,” said Gavin. “There’s also an electronic program that lets him see how I’m doing.”

His longer-term goals include competing on an NCAA Division I college team, then enlisting in the U.S. Army for their marksmanship unit.

“You’re constantly learning in this sport. Even the world-record holders work on improving themselves,” Gavin said. “You’re always learning, trying to do better than you did yesterday, trying to improve one thing at a time.”