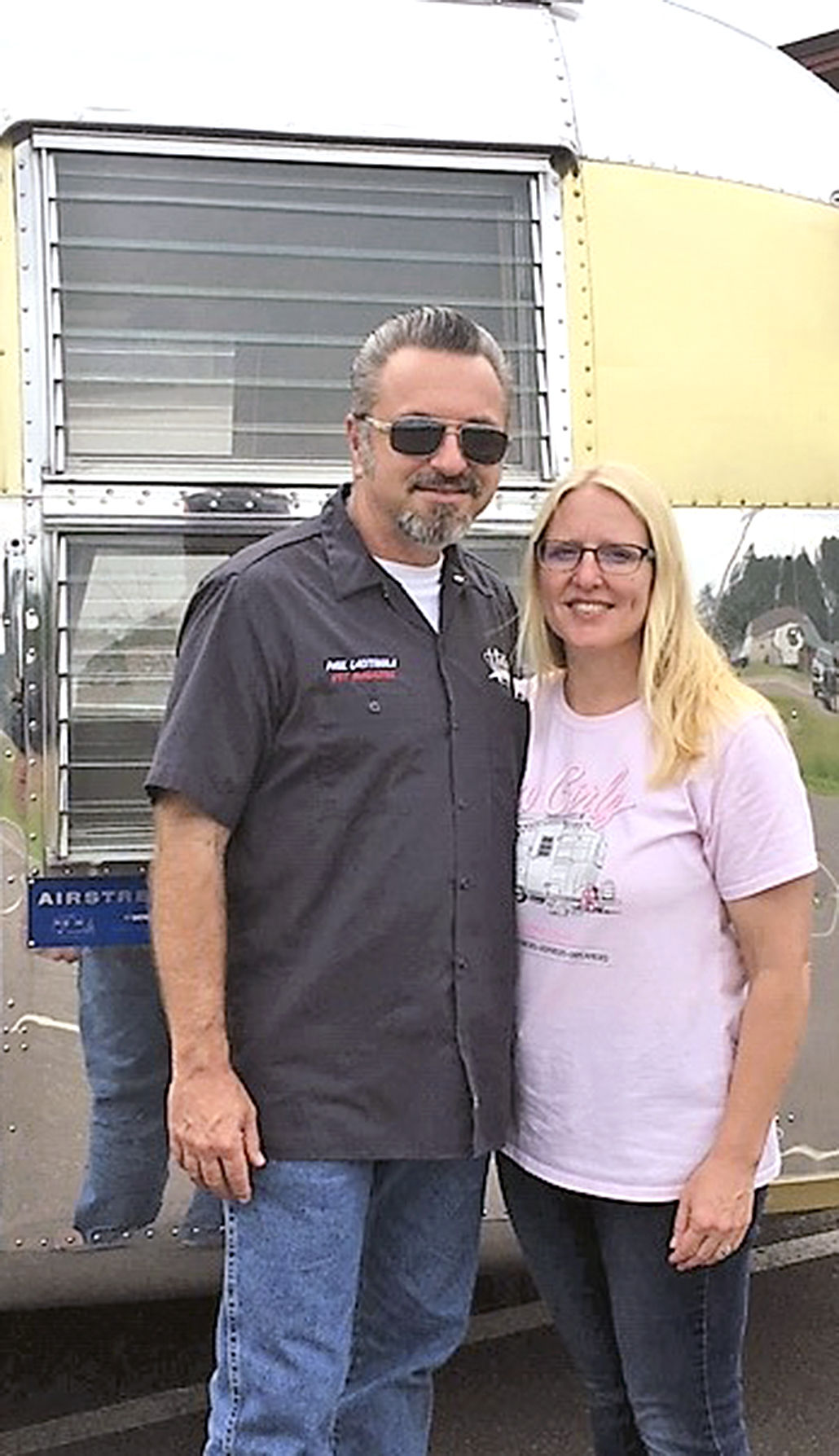 The Airstream trailer with a gold stripe is one of a kind.

The Airstream trailer with a gold stripe is one of a kind.

Caroline Lacitinola said her love for vintage camper trailers isn’t about just the restorations, travel or investments. For her, it’s about the emotional connection of looking back at past times spent with family and friends.

Caroline and her husband, Paul Lacitinola, traveled through Mora over the Fourth of July week in a unique Airstream trailer. The Lacitinolas are from Elverta, California and were on their way home from a cross country road trip which took them to Jackson Center, Ohio where the Airstream Manufacturing Company is located.

Caroline has family in Mora, so they stopped to celebrate the holiday.

The trailer they traveled in was a 1961 Golden Caravan Airstream Trailer, a rare model with an interesting story.

Airstream Trailers are silver in color, but in 1957 owner Wally Byam had a camper trailer made for his wife Stella covered all over in gold aluminum. It was the only one made until another Airstream was ordered by the president of the company, Art Costello. He wanted the design to have a gold stripe, and it rolled off the factory floor in 1961. Those models are the only two in existence with gold aluminum. A couple of years ago the Lacitinolas were contacted by the latest owners of the 1961 model, and after doing some research, they bought it. The 1957 model is on display in Ohio.

The Lacitinolas story began out in California where they met and married. Caroline stayed at home with their children, Angelo and Grace. Paul worked in law enforcement and then marketing, but always had a passion for vehicles. In his spare time he wrote a monthly article for a hot rod magazine, and thought it would be nice to have something similar for people with vintage trailers. What started as the one page flyer Paul created has now evolved into a magazine titled “Vintage Camper Trailers” that he and Caroline manage.

Over the last 12 years the Lacitinolas have also been collecting old vintage trailers. They restored and resold some, but many they kept to use, or for storage. The Lacitinolas figure they now own around 20 trailers. “We collected for many years, but now we have the travel bug,” said Paul. They prepared the Golden Caravan to take on their first cross country trip, with stops along the way at Vintage Camper Trailer Rallies.

A Vintage Trailer Rally is “basically a car show you sleep at,” said Paul. These events are all over the country, and the Lacitinolas host several a year out in California. Paul and Caroline are known in the camper trailer world for putting on a good party, usually with a theme. They rent out a campground and people from all over bring their vintage campers, style themselves in the theme, listen to live music, play games, eat good food, and all of it is courtesy of the hosts.

Getting to know the people and seeing the wide variety of trailers is what the Lacitinolas most enjoy. Some people just bought a trailer and are in the beginning stages of restoration, and others have spent thousands of dollars to design their dream home-away-from-home. Yet it doesn’t matter what you have or what you have spent, everyone is there to have fun and learn from each other. “It’s not about competition, it’s about relationships,” said Caroline. “Really, most people have an emotional connection to this hobby. They remember time spent with their families, it gives them a vision of the past,” she added.