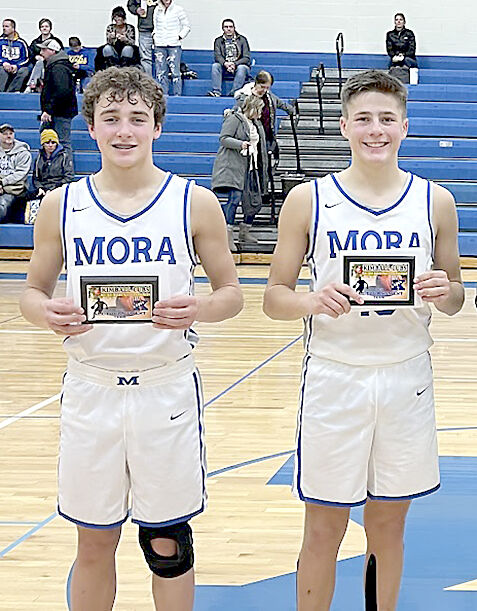 The Mora Mustang’s were the champions of the Kimball Holiday Tournament played Dec. 17 and 18.

The Mora Mustang’s were the champions of the Kimball Holiday Tournament played Dec. 17 and 18.

On Saturday, Dec 18, the Mora boys returned to Kimball to play the Kimball Cubs, as Kimball beat PACT Charter Panthers on Friday. Not considered a three-point shooting team, Mora came out hot from three-point land as they hit five three-pointers in the first half, three by Jonah Smart. Mora took a 39-29 lead into halftime. In the second half, the boys came out firing from distance again, making three of the first four three-pointers to expand the lead 48-32 in the first three minutes.

The Cubs tightened their defense and brought the game to a ten point deficit midway through the second half. It would remain that way until the Cubs made it a nine point game with 2:33 left in the game. The Cubs then started fouling under two minutes, sending the Mustangs to the line eight times, making six from the charity line to secure the victory.

The night before, Mora had only made three of eight three-pointers vs Brandon-Evansville. Versus Kimball, Mora went 10 for 20, shooting 50% from beyond the arc. Max Sampson led the team with 21 points and three-pointers made, sinking four of six. Jonah Smart, not even attempting a three-pointer the game before, sank three in a row in the first half. Smart finished the night with 11 points and seven rebounds. Dom Beaulieu scored 10 points while Dallas Fix added eight points and grabbed eight rebounds. Gage Braiedy and Madox Balmer each scored seven points, and James Oslin scored four points but grabbed eight rebounds.

Garret Honstrom is possibly out until mid-January with a wrist injury that he suffered in a game vs Aitkin on Dec. 9. “Without Honstrom, only two guys currently have varsity experience, and few varsity minutes at that. It literally is a brand new team.”

Last year’s team had eight seniors, going 16-2 overall, 12-1 in conference. This year’s team is following last year’s trend, improving their record to 5-1 Monday, Dec. 20, after beating Chisago Lakes by a score of 66-57. “I’m very happy with how the inexperienced varsity players reacted to getting out there and playing at this level,” said Grachek. “It usually takes a time to be able to play at a varsity level with the intensity and skill our program requires.”

Next up: Mora will play in another tournament on Dec. 29 and 30 in Pequot Lakes. Then they are back on the road at Pierz on Jan. 4. The next home game will be Thursday, Jan. 6 vs Little Falls.