Tayven Peterson medaled in the 110 hurdles, finishing 5th. He finished in 10th place in the 300 hurdles, just one spot out of advancing to the finals. This shot is from the 110 prelims on Friday. 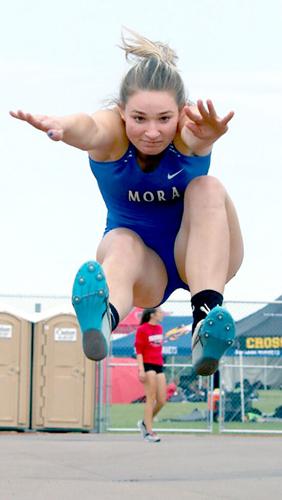 Tayven Peterson medaled in the 110 hurdles, finishing 5th. He finished in 10th place in the 300 hurdles, just one spot out of advancing to the finals. This shot is from the 110 prelims on Friday.

On Friday, June 10, Tayven Peterson missed finals in the 300m hurdles by one-thousandth of a second, good enough for the 10th best time in preliminaries but broke the school record with a time of 41:34.

Peterson was seeded to take seventh place in the 110 meter hurdles with a time of 15:62 after the preliminaries on Friday, but ran another personal record of 15:59 on Saturday to give himself a fifth place medal.

“The experience at state is completely different than any other track meet,” said Peterson. “The amount of people there is insane. The completion is the next level and makes it so fun. My goals for the state meet was beating both the school records and advancing to finals in both events. After the 110 hurdles prelims on Friday, I checked the results, and it showed I made it to finals, and I set a new personal record. I was really happy with that. Later in the afternoon I raced the 300 hurdles and missed finals by 1,000th of a second. I was disappointed, but then realized I beat the school record so it made it a little better. On Saturday I competed in the 110 hurdles finals and placed fifth and was six hundredths of a second away from the record. It was a great way to finish my junior year. Michelle has done so much for me this season and is a great coach. I can’t thank her enough. I wanna say thank you to my parents for being my biggest fans and supporting me as much as possible this season.”

Ella Anderson had an outstanding section tournament in North Branch to secure her spot at state.

“Anderson has been a solid 15 foot jumper all season,” said jumping coach Brent Nelson. “Her first jump at sections was 16’ 1” and that was enough to advance to state. That was an exciting day for her.”

At state her top jump was 14’ 9.25” which put her in 14th place. “Ella did the right things all season and was very focused on high jump,” said Nelson. “It was exciting to watch her improve throughout the season and to watch her hard work payoff in the end by reaching her goal of being a state entrant.”